I started by preparing and laying out all conductors which included splices. TE Connectivity open barrel crimp splices were used and the splices insulated/strain relieved with Raychem SCL heat shrink tubing. 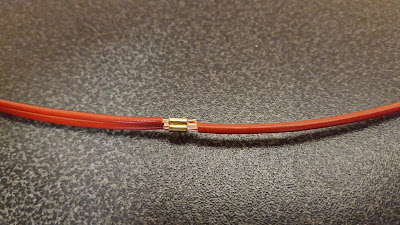 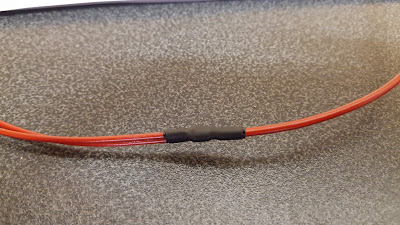 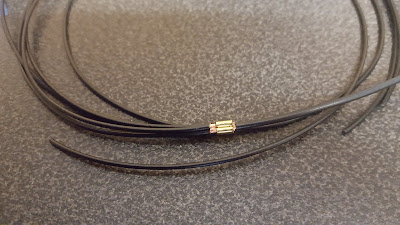 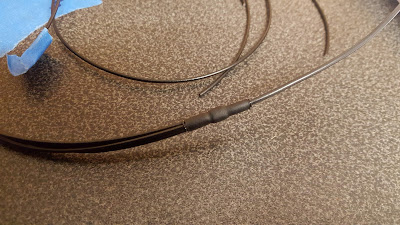 Once the spliced conductors were in place, I checked that the splices were all lined up within the transition sections and bundled the wires securely using harness lacing thread or cable ties.

All single conductors were then run in the harness, periodically replacing the lacing thread loops or cable ties to maintain the harness shape. 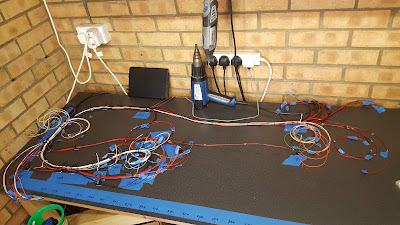 The last parts to add to the harness were the shielded cables used for crank & cam, wheel speed and knock sensor signals as well as data network twisted pair cables for ethernet, CAN-Bus & USB.
With all conductors laid out, the harness bundles were kept in place with cable ties and kapton tape. before being removed from the routing pegs. 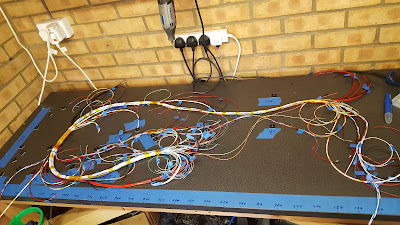 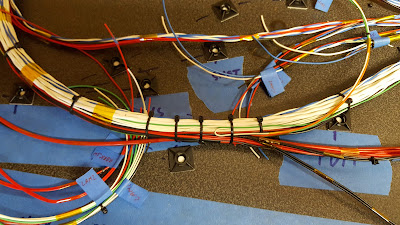 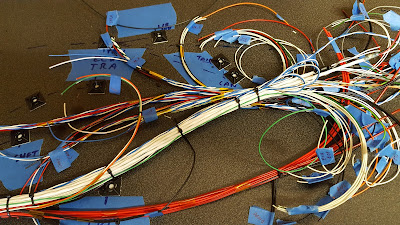 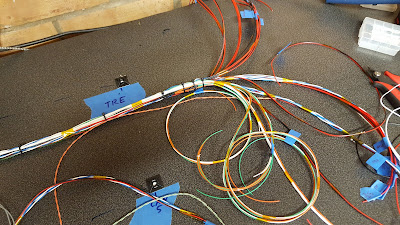 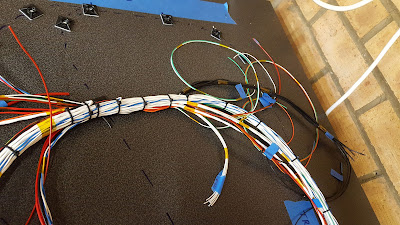 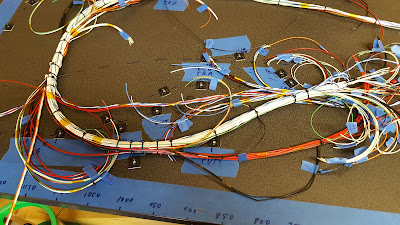 The shielded cables were prepared at each end to splice out the shielding braid to a shield drain wire which could be added to connectors. The sleeving was removed, shield braid doubled back to overlap the sleeving by c.5mm and the excess braid trimmed. Then TE Connectivity solder splices were applied along with a short section of wire and recovered in place.

Transition points were fully wrapped in kapton tape to protect the underlying wires from the transition boot potting compound. Branch diameters were measured and the appropriate size Raychem DR-25 heat shrink sleeving applied and recovered.
A section of Raychem SCL heat shrink tubing was then applied over the transition sections to insulate and strain relieve them. SCL has a high shrink ratio of 3:1 and is very rigid when recovered so provides great support for transition points.
Cable ties were added to the junctions to help provide additional strain relief where branches separate. 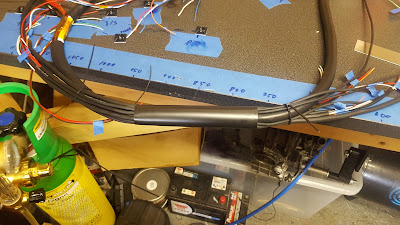 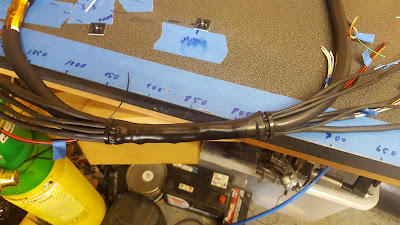 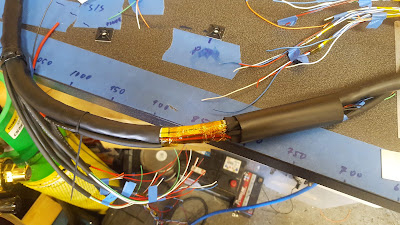 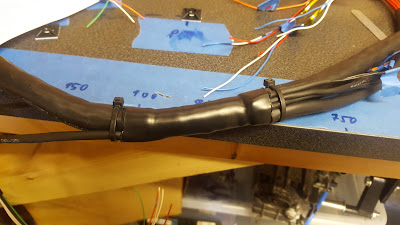 At this point, the harness was dry fitted to the bike to check if any adjustments to branch length was required. Most branches had been left c.50-100mm longer than measured to allow for some adjustment.
Only 2 or 3 branches needed adjustment due to how they interacted with other branches which was difficult to predict during the initial measurement step. 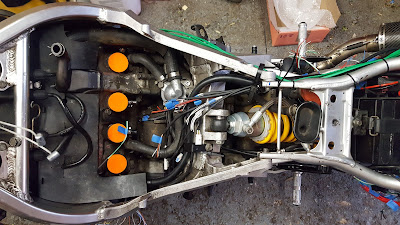 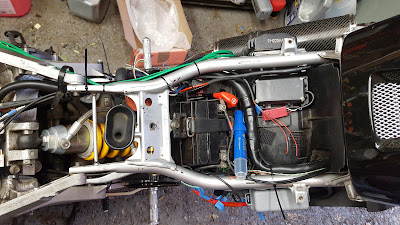 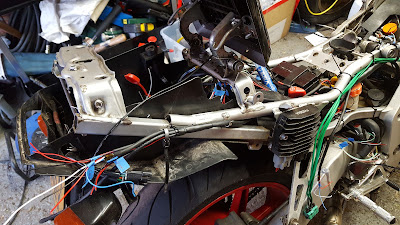 With final branch lengths marked, the harness was removed from the bike again. The final branch lengths were measured to update the harness layout drawing.
Connector labels were applied wherever possible and then the branches terminated with Raychem SCL heat shrink. The labels are simply self adhesive printed labels held in place with clear heat shrink tube. They are not quite as neat as printing the labels on heat shrink tubing but they serve a purpose and hopefully will not degrade too quickly with use.

The wires were then trimmed to length and terminated with the connector contacts. In most cases, populating the connector housings was pretty straightforward as wires could be identified by wire size or colour but in some cases the wire function had to be verified using a multimeter to ensure the terminals were inserted in the correct connector cavities. 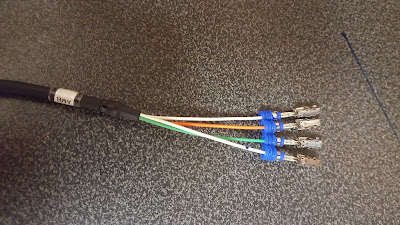 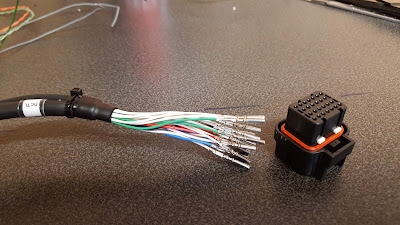 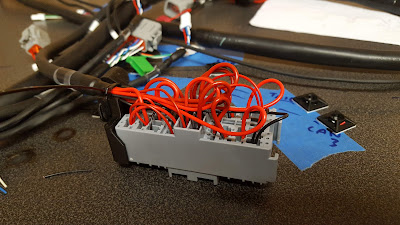 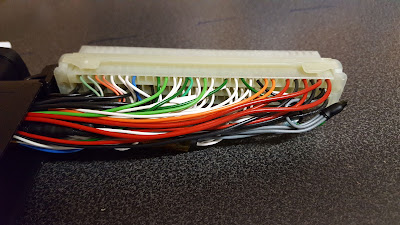 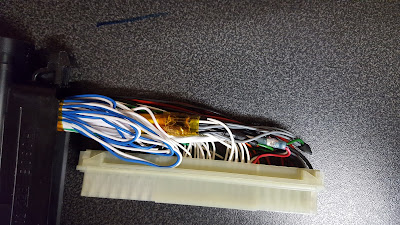 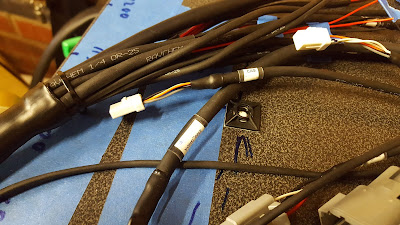 The communications port connector was the only non-crimp connector and so was a little more involved than the others. I used a sealed panel mount RJ45 female connector from RS Components which required the wires to be soldered to contacts. As well as the 4off LAN connections, I also added CAN-Bus & USB connections to the 4off remaining spare pins.
The wires were first soldered to their respective pins. 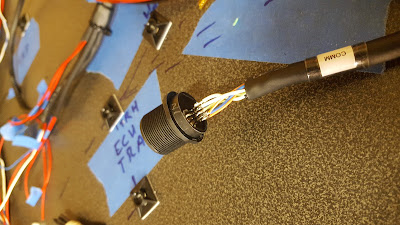 Then the backing boot was partly recovered in place. I had to use 1" Raychem SCL to fit over the connector OD. If cut to size before recovering, the boot would tend to slip off the larger connector as it shrank so the threads were first protected with kapton tape and then a longer than needed section of SCL was used. Recovering the tubing over the connector lip provided an anchor point for the boot to keep it in place. The boot was shrunk down to min diameter around the wires but leaving the last section unrecovered for now. 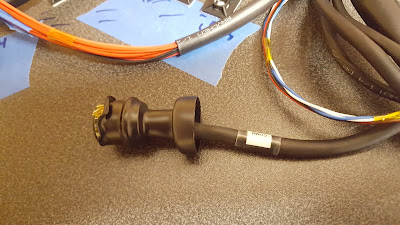 Epoxy potting compound was poured into the cavity left by the partly recovered boot. This would insulate and strain relieve the soldered connections. 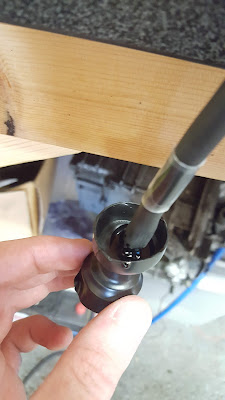 The remainder of the boot was then recovered and the epoxy topped up to fill the boot. Once cured, the joint was rigid and the excess SCL could be trimmed off the threaded portion of the connector.
This communications connector will live in a 3D printed bracket under the pillion seat for easy access to the ECU, CAN-Bus network and dash controller USB interface. 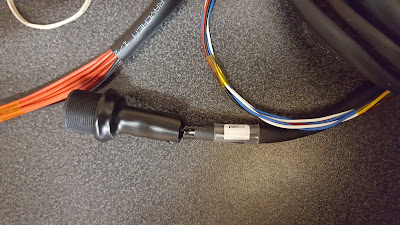 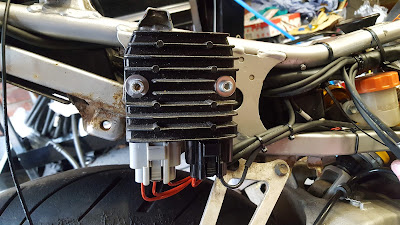 With the harness now complete, the process of powering up the bike and checking that everything worked as planned was carried out. This process consisted of only connecting relays, fuses and switches in sequence and verifying after each connection that 12V battery power was being supplied to the required points before moving forward.
The first step was to verify that 12V was being supplied to the required points with only the starter relay connected. This was mainly the 4off relays in the PDM but also some instrumentation that required permanent battery supply. i.e. the dash.
The next step was to connect the lights relay and fuses as well as the ignition switch and verify that power was being supplied to the correct pins in each connector. Then all lights and controlling switches were connected and lights function verified.
All control modules (ECU, dash, CAN modules) would also be switched on via ignition switch but are on a dedicated relay so this relay and fuse was fitted next and, again, power supply verified.
The next step was to connect the relay and fuse that would supply power to the fuel injectors and ignition coils. Injectors & coils power is enabled via the neutral switch, side-stand switch and engine run switch so these were also connected and the neutral/side-stand safety kill verified.
At this point, starter operation could also be verified. The starter engages when the ignition switch is on, clutch depressed and starter button pressed.
The final step in verifying the 12V distribution was to connect the EGO sensors and fuel pump relay and fuse. This relay was connected to be enabled at the same time as the injectors & coils relay.
All these checks went without issue so the next step was to connect the ECU, check 5V supply to all sensors, connect to the ECU using the communications socket and check that all sensors were reading sensibly.
This marked completion of the harness verification so the harness branches were all tidied up and routed as intended. The throttle bodies were fitted in preparation for first start.
The below photos show the finalised harness installation in more detail.