After a bit of research into the communication problem between the laptop and the ECU, it became clear that the issue was with the serial to USB adapter. Seemingly its not at all uncommon for an ECU to refuse to communicate through an adapter and which adapters work and which don't tends to be a hit-and-miss thing.

So rather than buying another adapter and hoping it would work, I decided to skip the problem altogether and try to pick up an old laptop with a direct serial port. It didnt take me long to find an old Dell Latitude C610 on ebay and got it posted for about €50 all in. Not a bad deal.
This is now my dedicated tuning laptop. It will never get connected to the internet if I can help it and it will only ever run software needed for tuning. 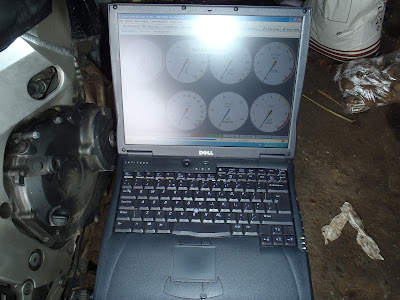 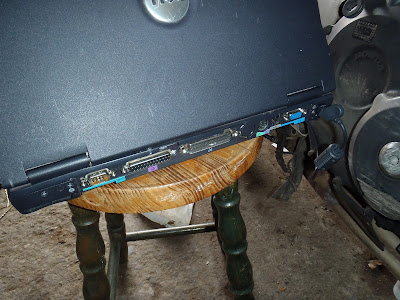 As soon as I was able to verify communication with the ECU, I took the opportunity to upload the latest firmware version to the microsquirt before I did anything else. It was nice to see it complete rather than run into errors as it had two weeks before! I then set up the project in the tuning program, TunerStudio. Once the basics were set up I needed to fix the .ini file which keeps all the base settings so that the ECU would be able to run my engine properly. The standard settings will only allow a max rev limit of 15,000 RPM so to allow for the 19,000 rev limit on the mc22, that needed to be changed. Luckily the .ini file can be easily edited in a basic text editor.

The only two sensors I had connected to be able to read was my RPM signal and the MAP sensor. The MAP sensor is giving a reading fine and when the engine is cranked over, the pressure drops as expected when the throttle is closed. It does need to be calibrated properly though as it is currently reading 190kPa at normal atmospheric pressure. This should be around 100kPa. I will need to try and find calibration data for that particular MAP sensor.

I then tried to start the bike on carburettors to see if I was getting an RPM signal. Thats when another problem reared its head... The bike wouldnt start... I thought it might be that the signal from the pulse generator didnt like being shared with the microsquirt but when I disconnected that, it still refused to start. I thought it funny that there were no pops which indicated it was even trying to start so I pulled out a plug to verify if I had spark. No spark.

At the moment I can only guess that tapping into the wires from the pulse generator is causing some sort of short circuit or other problems but I had no time to investigate further this weekend. It will have to wait until next time I get to it and I can do some more tests.

I'm thinking to do the same to my old ZXR400, I'm following your blog with very interest, pleas keep posting news!