First of all, I am delighted to say that I have started the bike on injectors! Sticking to the timeline though:

As I was unable to get hold of a used fuel pump at short notice in Ireland, I decided to chance repairing the ZX10R pump I had. So late last week, I fully stripped all parts of the pump and cleaned all the contact points with wirebrush, fine emery paper and contact cleaner and reassembled the unit.
When I then tested the pump, it worked perfectly so I proceeded with testing. 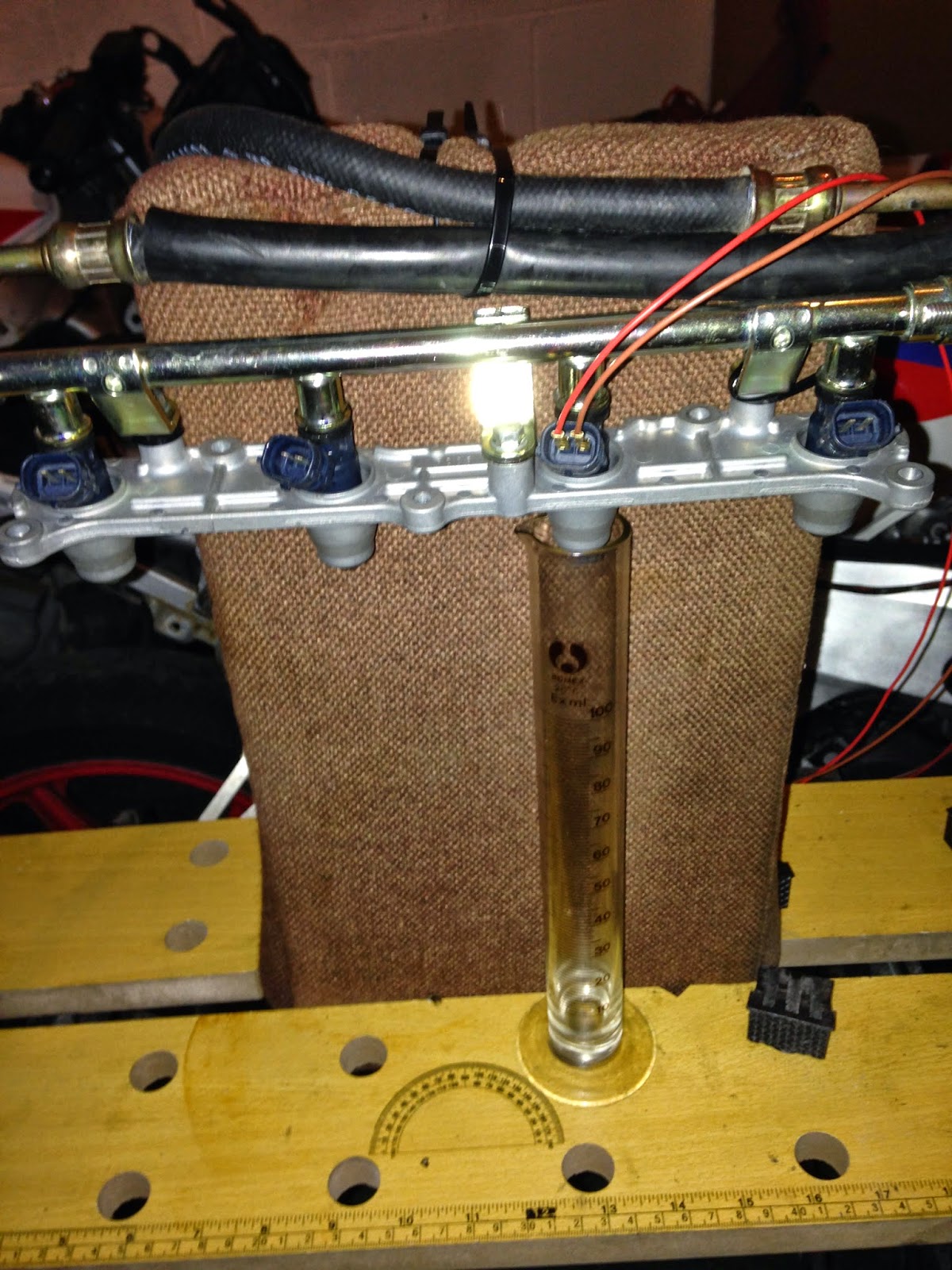 While the test rig was set up, I used the opportunity to test the injectors at various pulsewidths and speeds.

Once testing was complete, I re-installed the injectors in the throttle bodies and fitted them to the bike.

It took circa 5 mins of cranking and varying cranking pulsewidths before I got the bike to fire and sustain running. First start was even captured on film.

After first start, idle was very high (~4-5,000RPM) and the engine also sounded rough as if it was only running on 3 cylinders. Nevertheless, it ran and there was going to be some tweaking needed to refine it.

The next day, I was able to carry out more extensive testing and attempt to refine the idle. As it turns out, the roughness in running from the first start was due to one spark plug lead being unplugged! A quick fix. Idle was lowered significantly once I carried out a synchronisation of the throttle valves using a good set of vacuum guages. Once the throttle bodies were synchronised, I was able to get a steady idle around 2,000RPM.
Further adjustments of the idle pulsewidths meant I was able to get the engine to idle reliably and smoothly at 1,700-1,800RPM. I attempted to go down as far as 1,500RPM but the idle became slightly unstable and off-idle throttle response was not ideal. This is because the pulsewidths required at this engine speed were too low and most probably in the non-linear flow region of the injectors.


I adjusted the idle pulsewidths to achieve the lowest intake manifold pressure while still holding a stable idle. Ideally, I would have liked to know the air-fuel ratio also but my O2 sensor was not reading correctly. It consistently indicated extremely lean conditions even though I was able to bog the engine from introducing too much fuel. I was able to verify it worked correctly by inserting it in the exhaust of a known bike and getting a reading so I suspect the problem is caused by an exhaust leak between the headers and the cylinder head. This will need to be fixed before continuing with ride testing.

Even though the fuel VE table is still very basic and just a generic table generated by the software, the response off-idle is quite good and the engine appears to rev cleanly up to 6,000RPM. Ride testing will refine this even further and I am interested to see if this translates to a benefit in response when riding.
Posted by motthomas at 22:47

Hey man, Just wondering what Dash that is you're using, Also is it a simple installation?

It is a Koso RX2N 20k dash. For my application the install was pretty straight forward alright. I had a 9 pin connector that fit the stock terminal which made things easier as the majority of inputs the dash needs are supplied through this terminal. It's just a matter of figuring out what wires need to match up. Bear in mind that the Koso dash will not accept the stock CDI tach output so a normal install would need to pull the RPM signal using one of the other methods given by Koso. Constant 12V, switched 12V and coolant temperature inputs require a separate plug alright.