I may have skipped this topic due to the nature of the blog but at this stage it has become more of a project blog than a pure EFI conversion blog so it seems fitting to include it.

I had planned on doing a front end conversion for a while to improve the stability of the bike. I had spent a bit of time collecting the parts for it and then sometime before starting the bike on injectors, I installed most of it together.

I had grabbed a full K4/K5 GSXR600 front end for decent money.

I wanted to modify as little as possible in keeping with my "100% reversibility" motto I had at the time. I figured the GSXR steering stem could work in the CBR headstock with a different sized top bearing. The size ended up being pretty non standard but I managed to find one to suit in the US.

I also wanted to keep the smaller front wheel from the CBR rather than use the GSXR wheel. The GSXR axle is bigger than the CBR axle but I could again just swap the bearing size and dust seals to make it work. I did need to make new spacers to put the wheel in the right position. 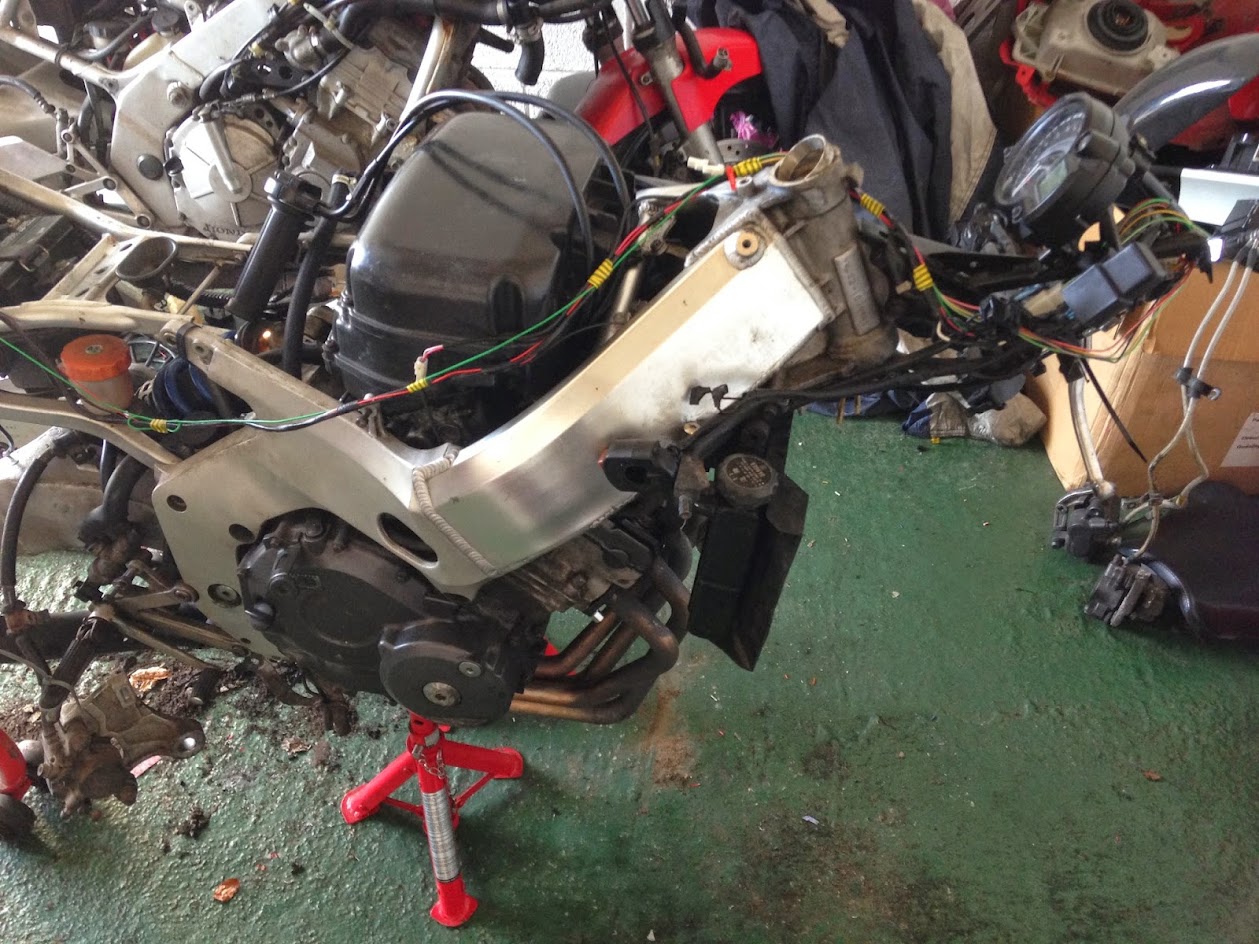 Then out with the old headstock bearing races. 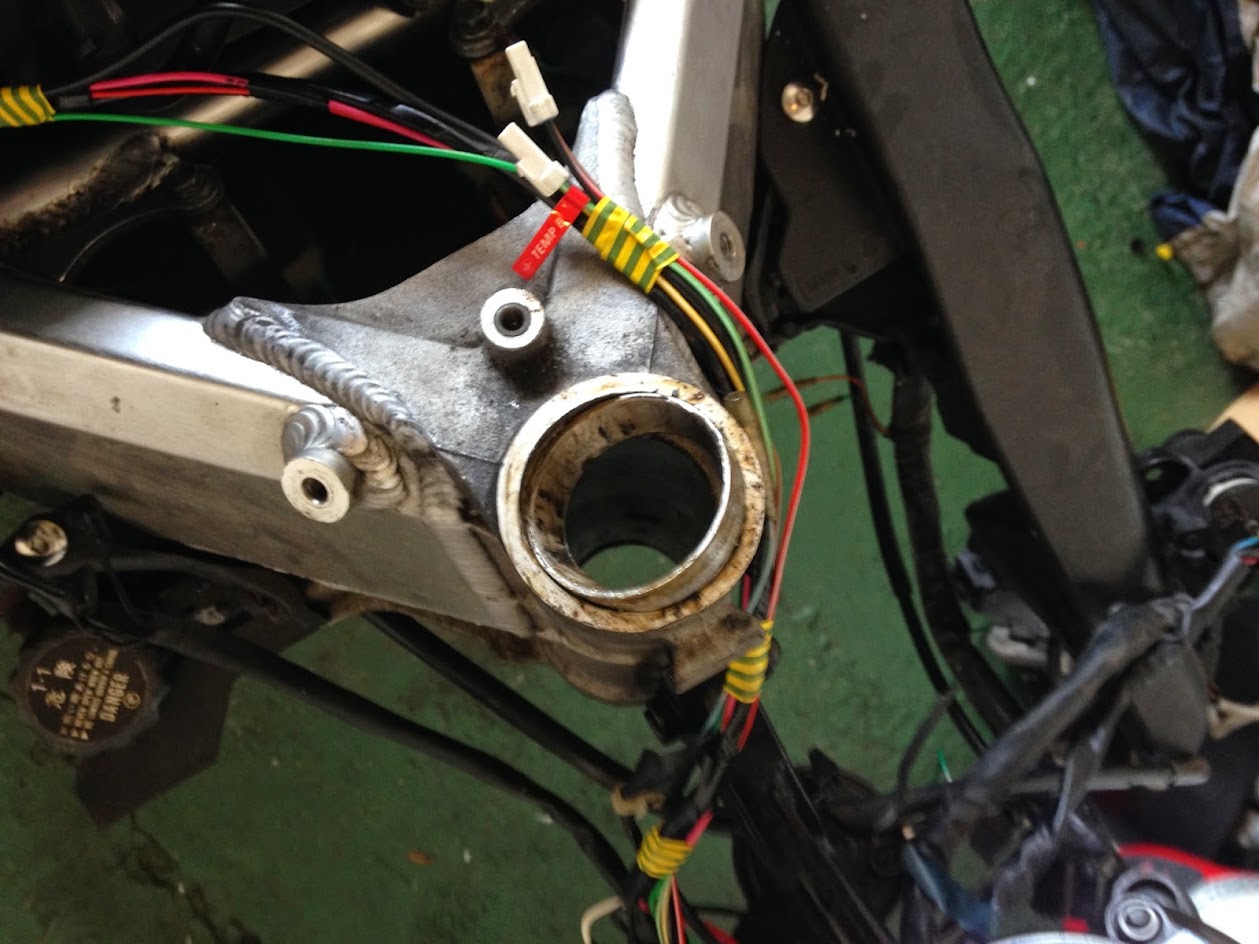 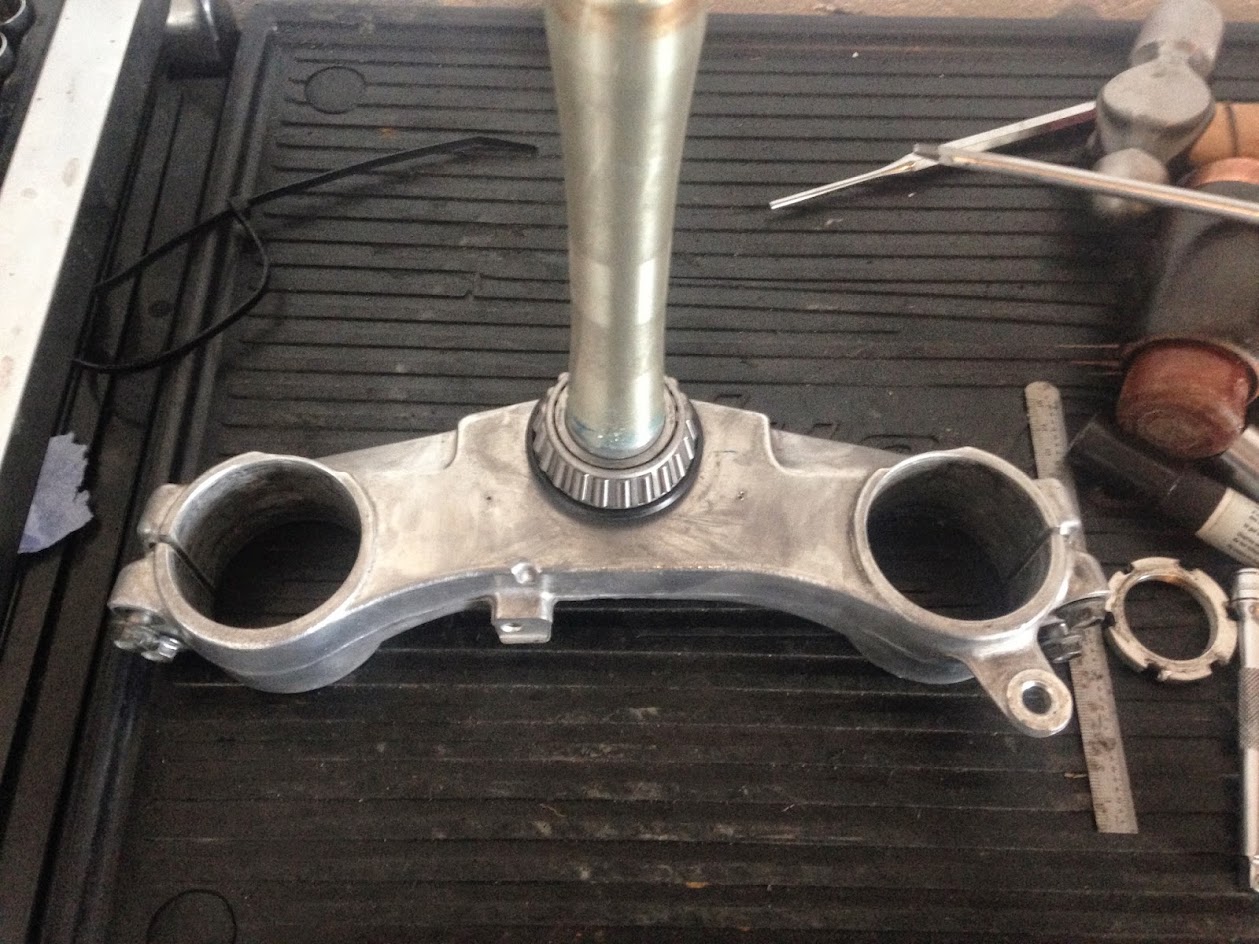 The new steering stem required a 30mm ID upper bearing but that made standard tapered roller bearing sizes too big for the 47mm ID CBR250 headstock upper bearing seat. Luckily I found a suspension reseller in the USA that could supply a bearing kit especially for these types of swaps including an oddball size tapered roller bearing 30x47x12 and a 3mm spacer to bring the assembly up to the 15mm stock bearing height and dust seal. 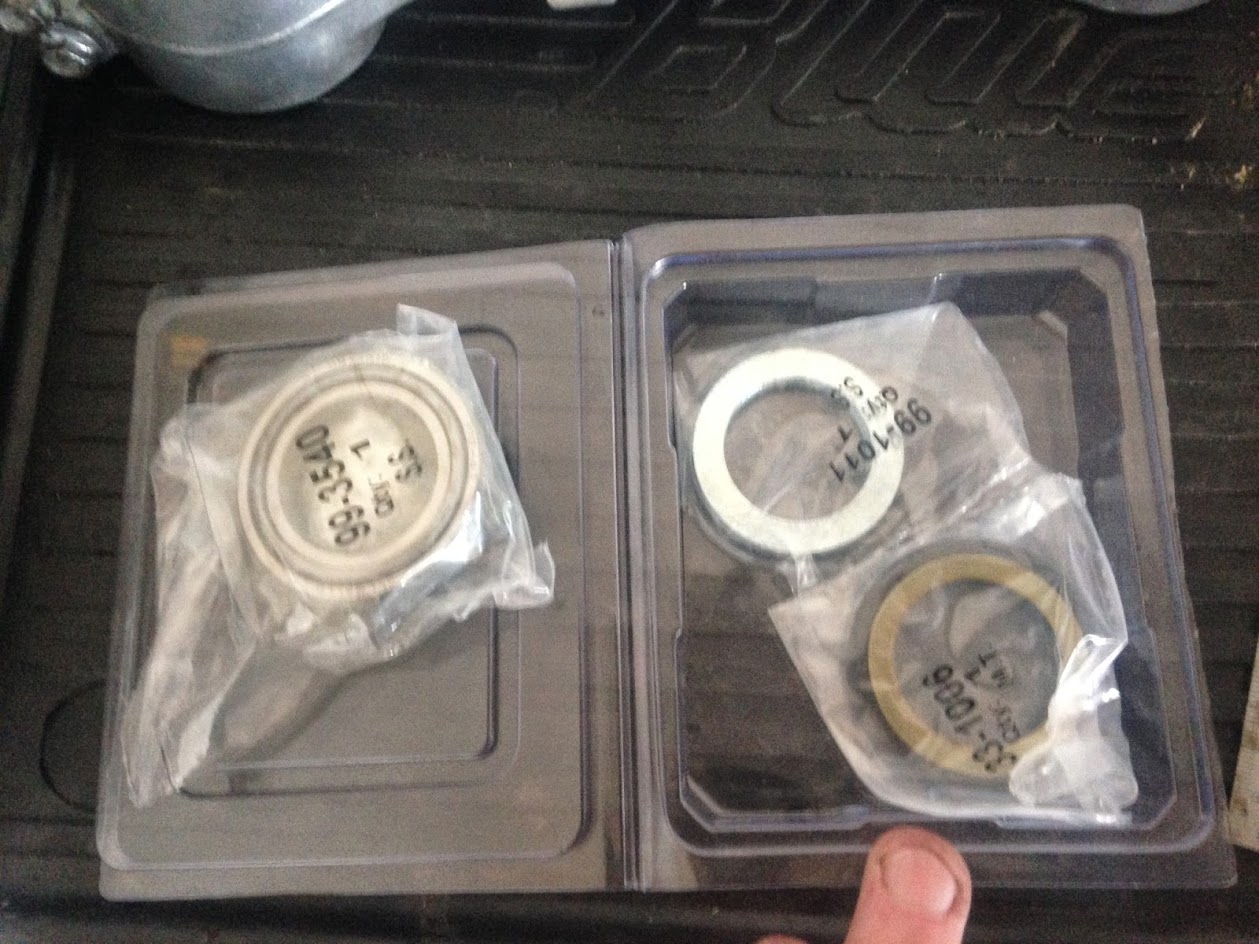 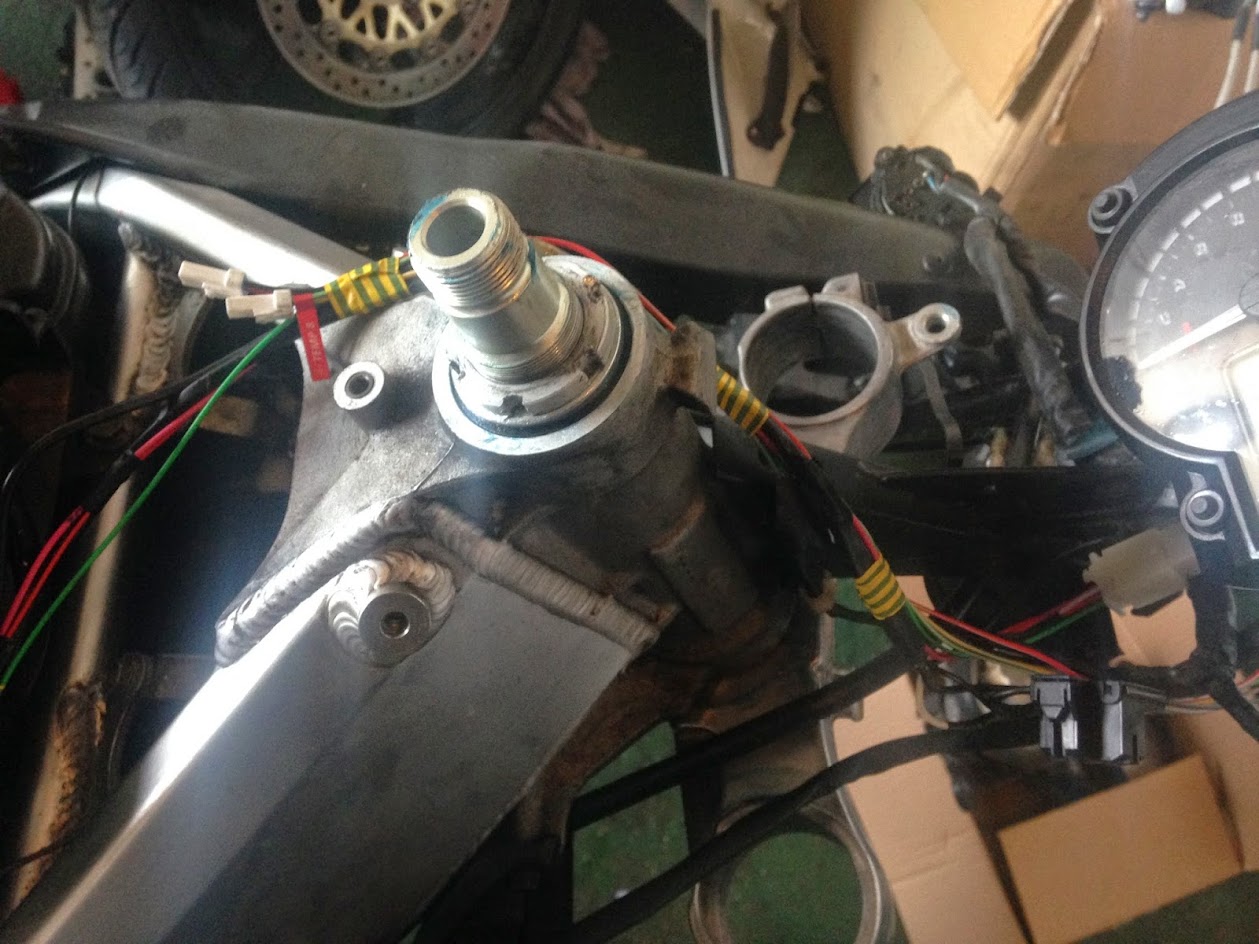 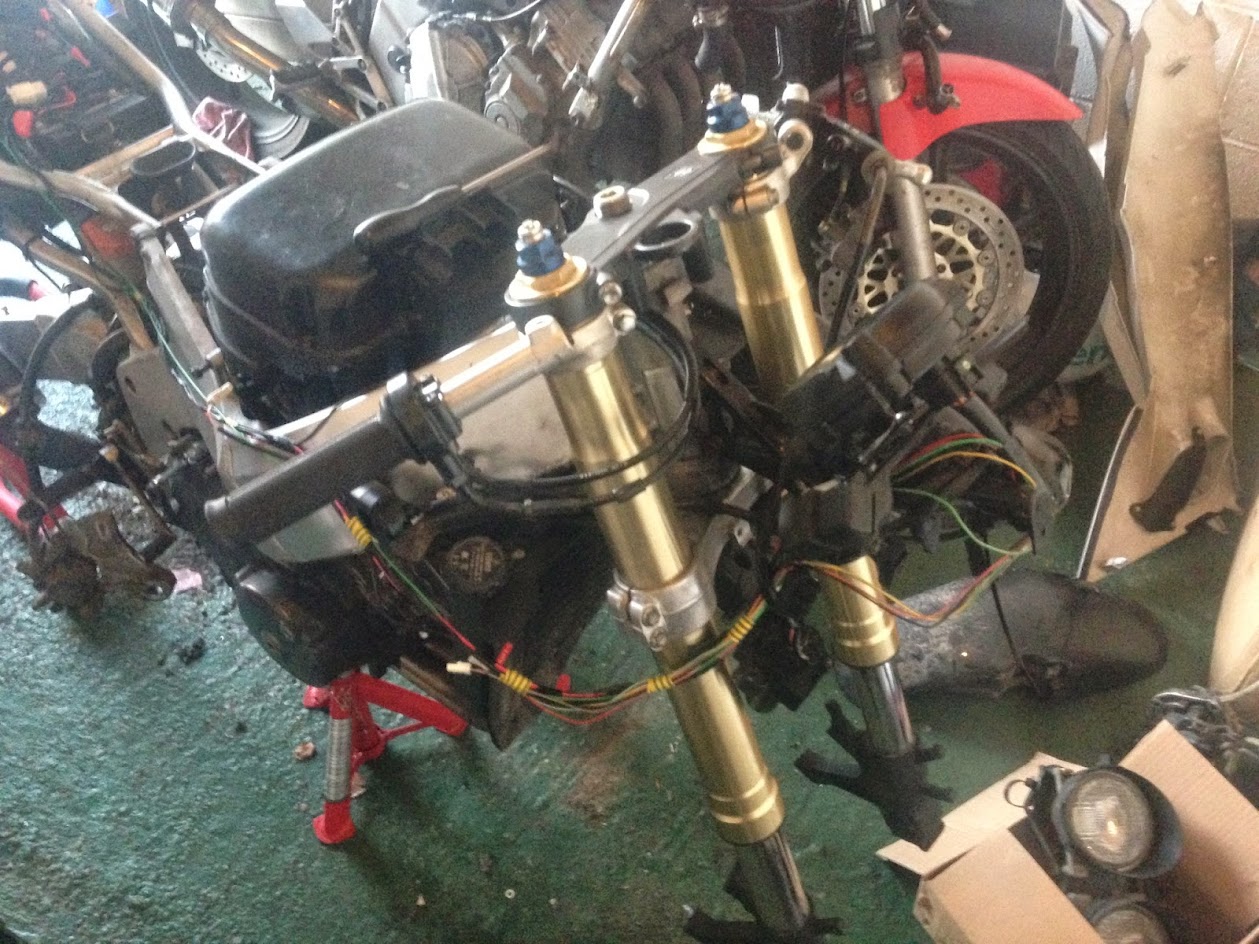 The throttle tube housing and starter/kill switch assy needed the placement lugs removed in order to fit onto the new clipon. 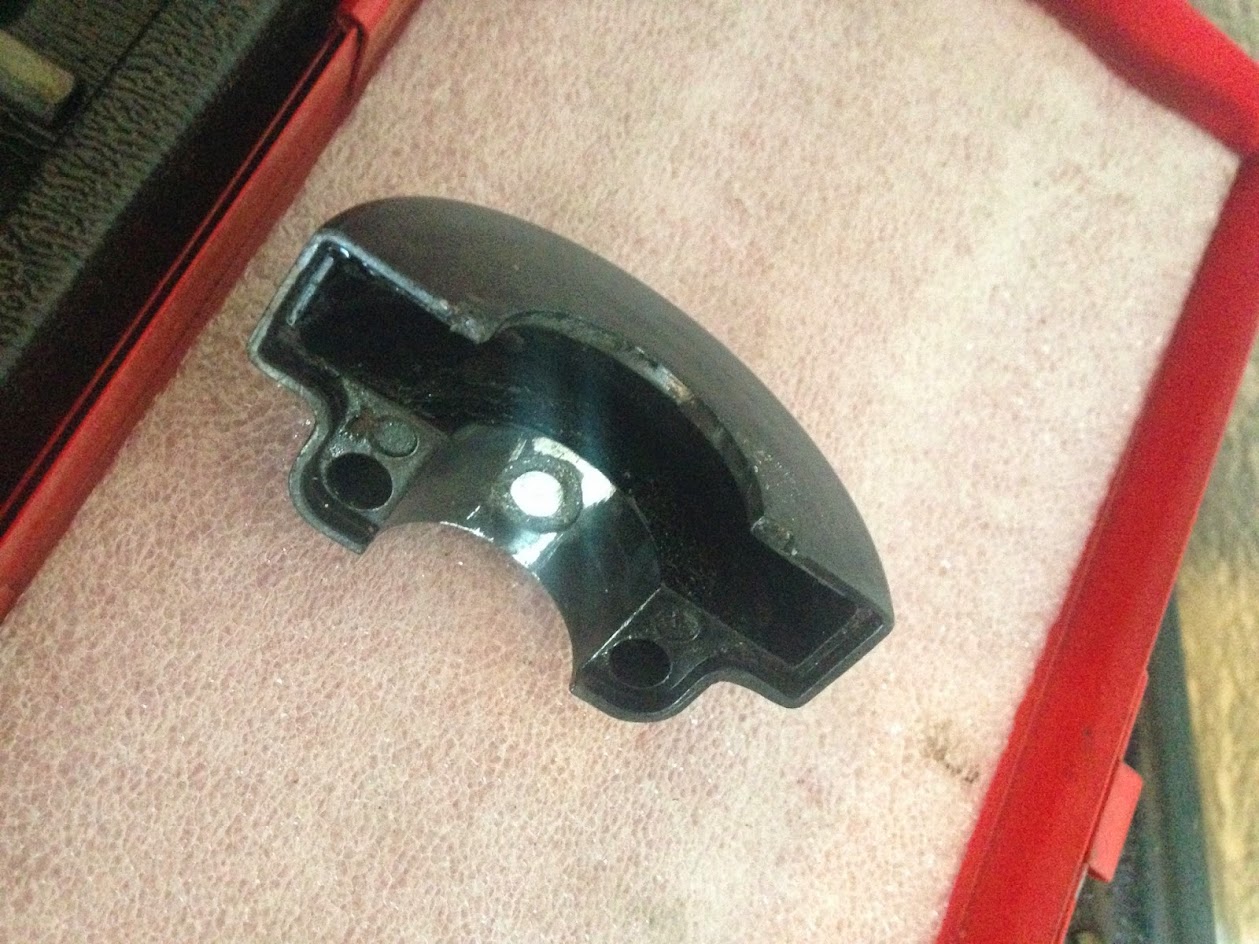 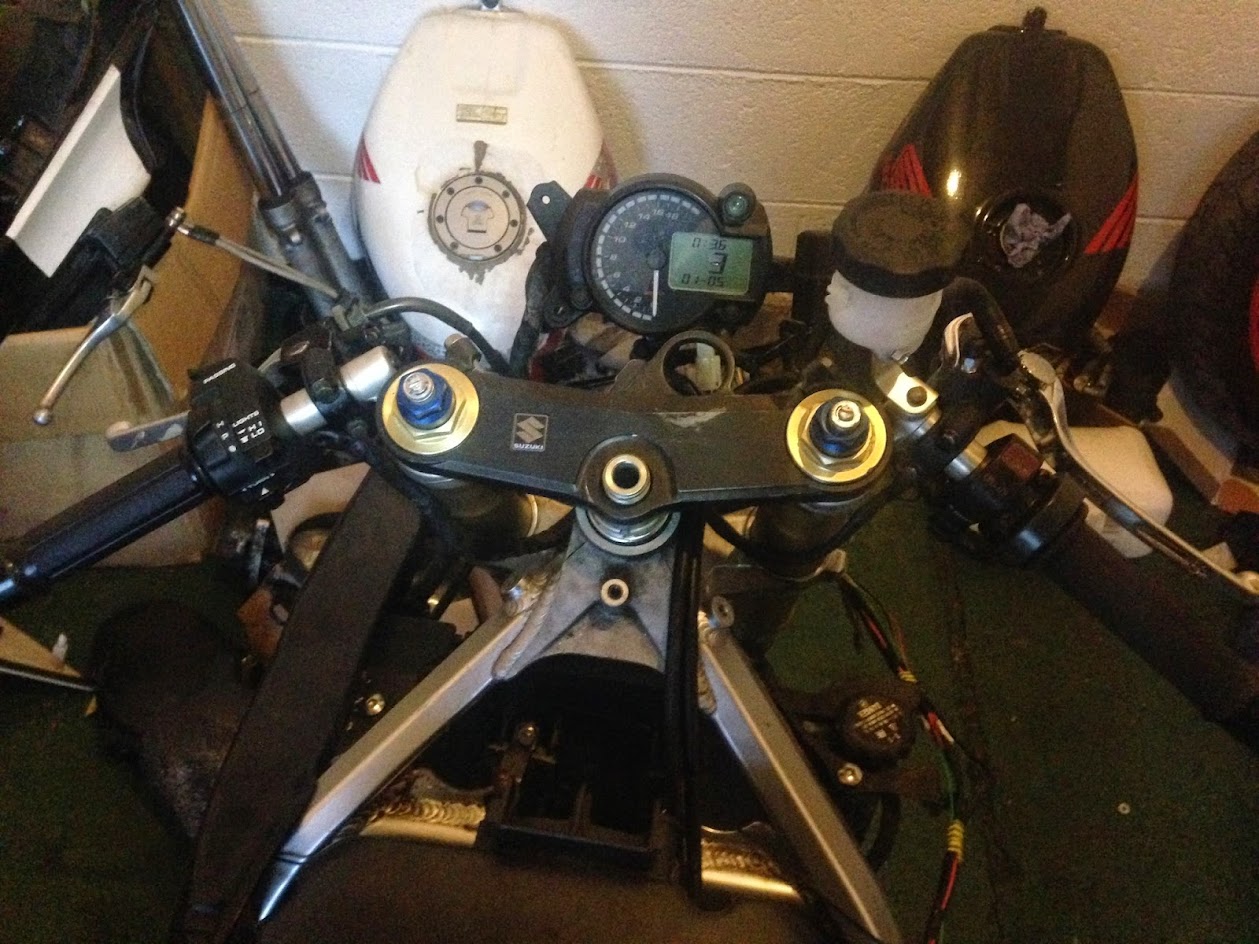 Moving onto the front wheel, first out came the old bearings & seals and off with the original brake disks 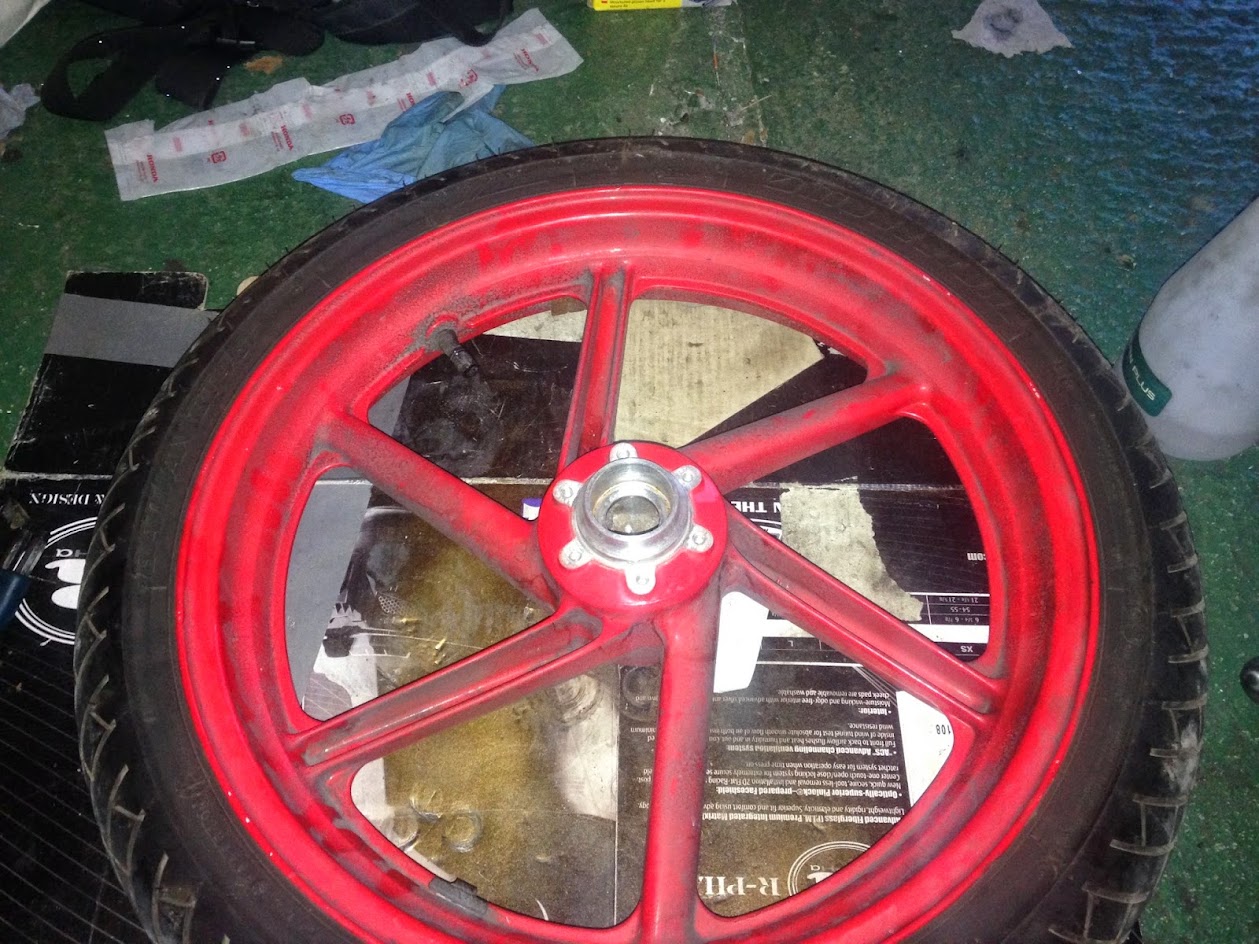 The new wheel axle is 25mm OD so the original wheel spacers and bearings would not work. To combat that issue I designed new spacers to suit.


Different size bearings (6905) allowed the wheel to fit straight on the axle and 32x42x7 oil/dust seals to fit. The bearing/seal stack is smaller than standard but that got swept up with the difference in wheel positioning on the GSXR axle. 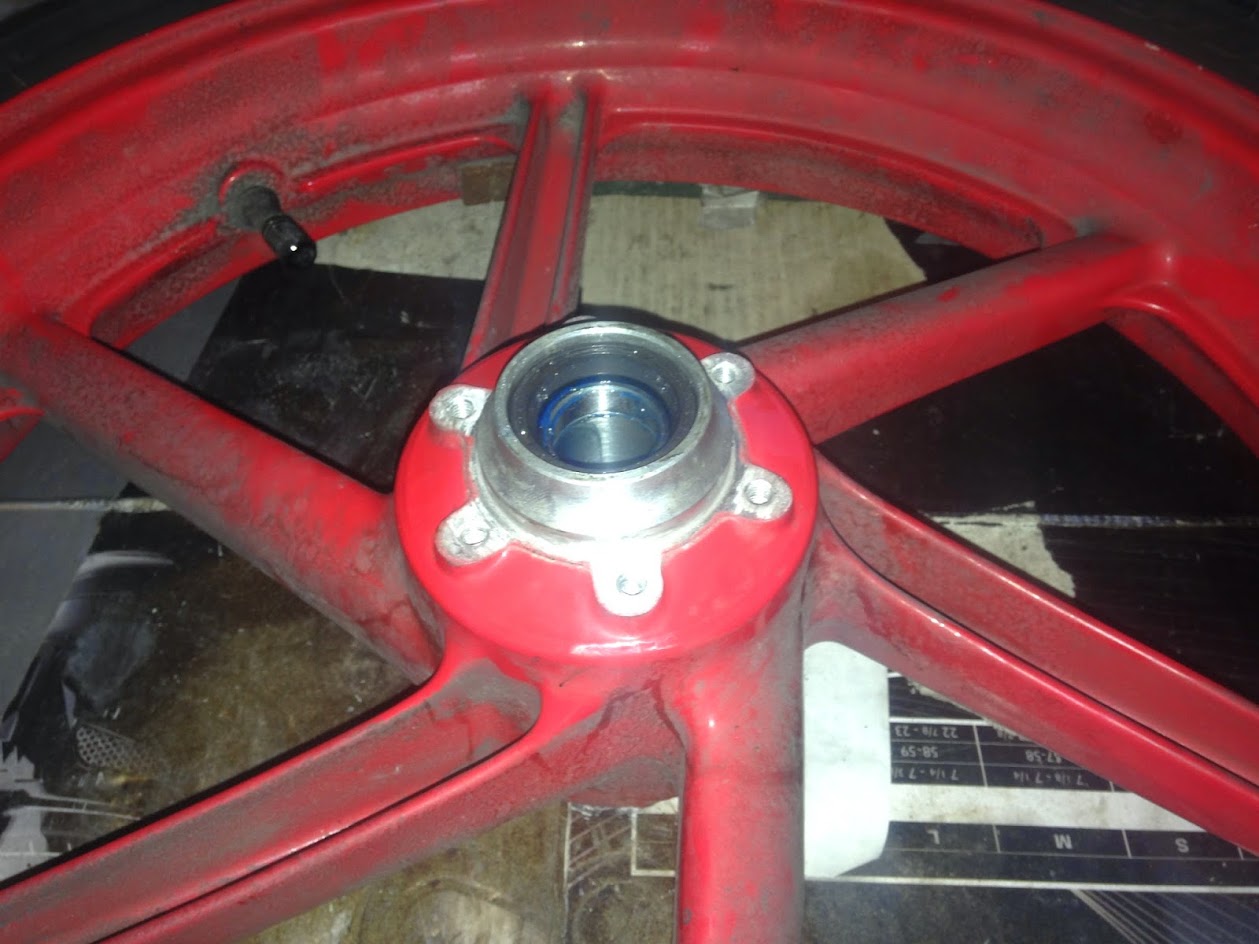 A pair of new CBR900RR disks. The photo below gives an indication of the size difference from the standard CBR250RR disks. 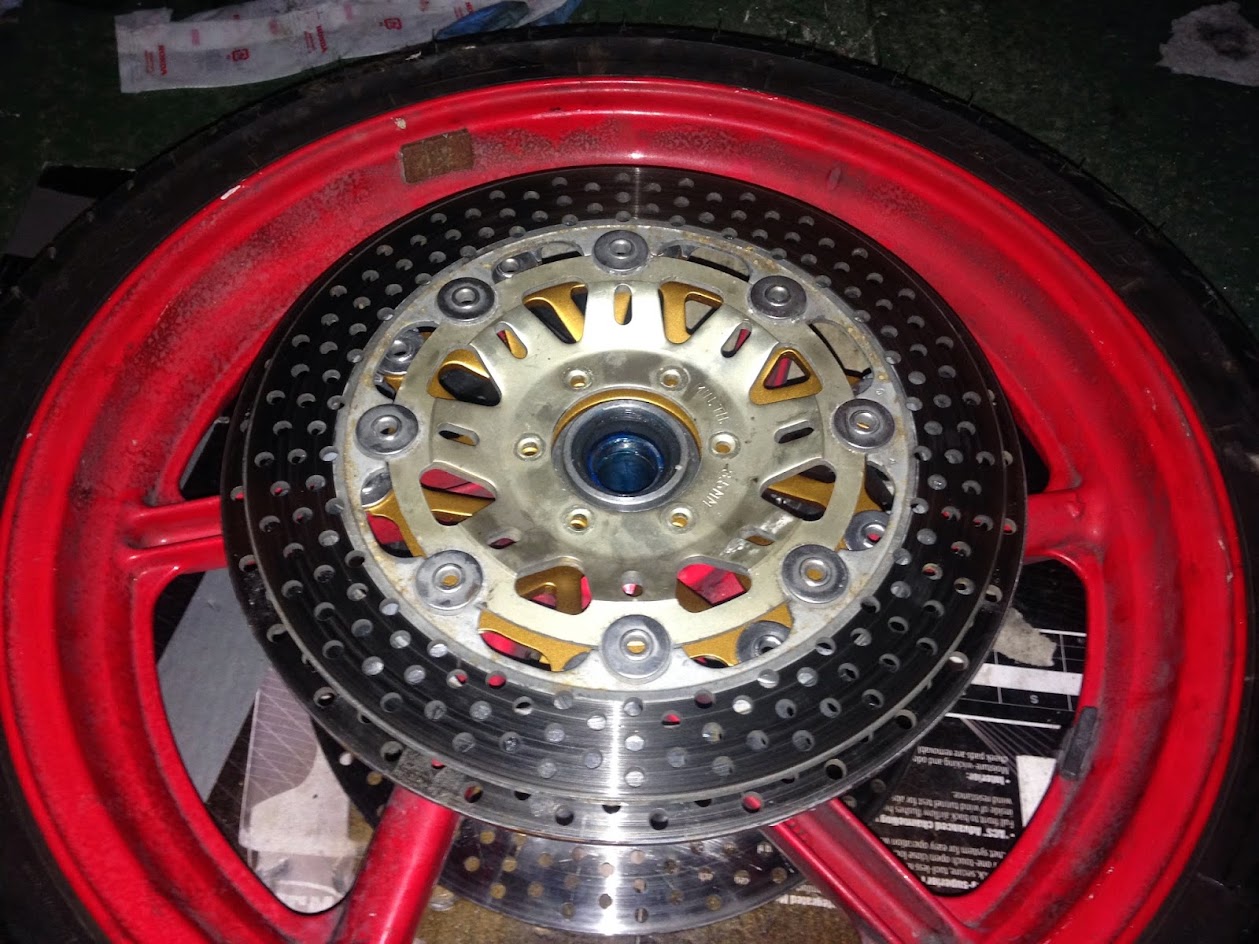 The wheel spacers were built into the new axle and nut but as the CBR250 wheel is narrower and includes an offset from centre, I needed additional spacers. These also compensated for the smaller bearing stack. 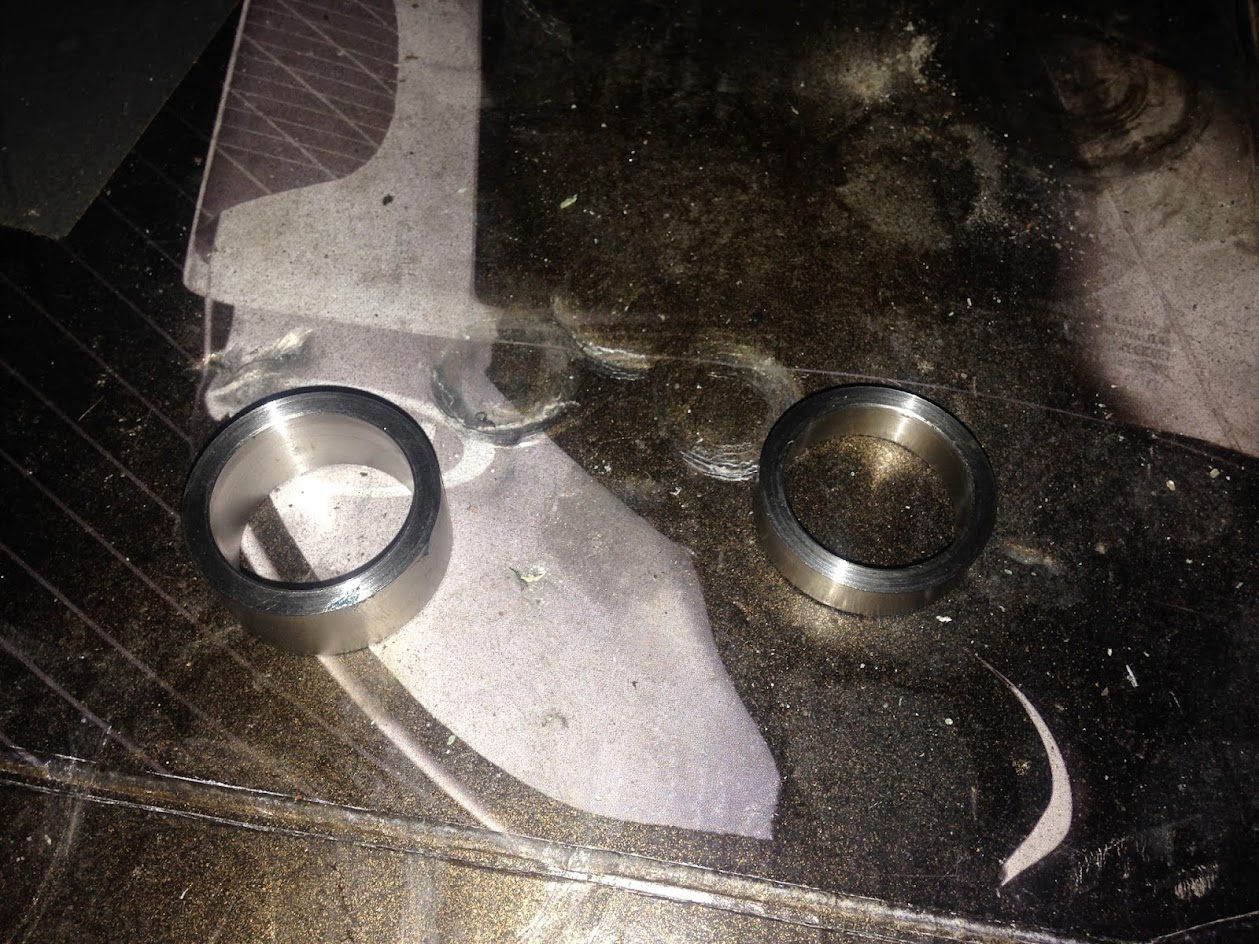 Everything on and looking fairly well! 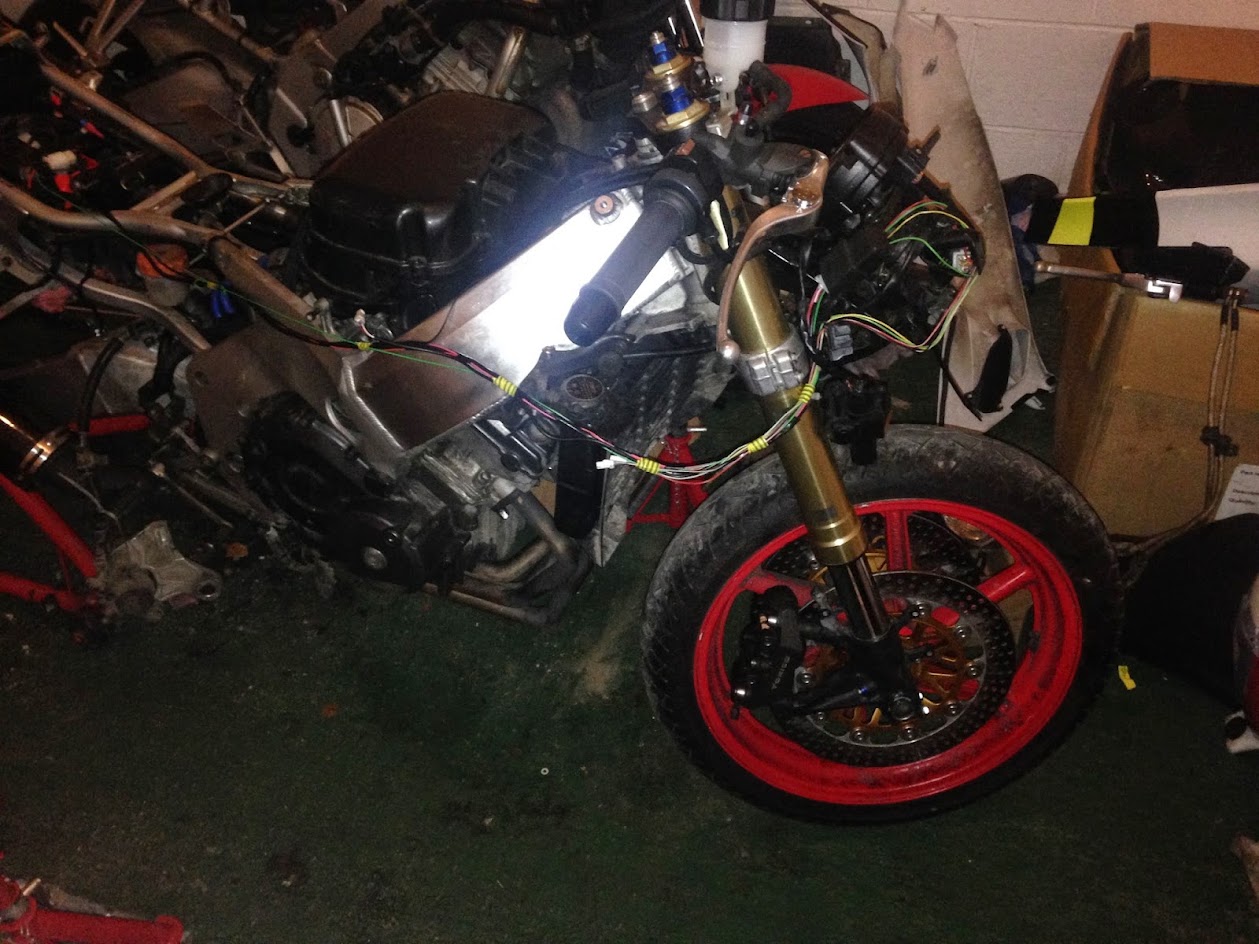 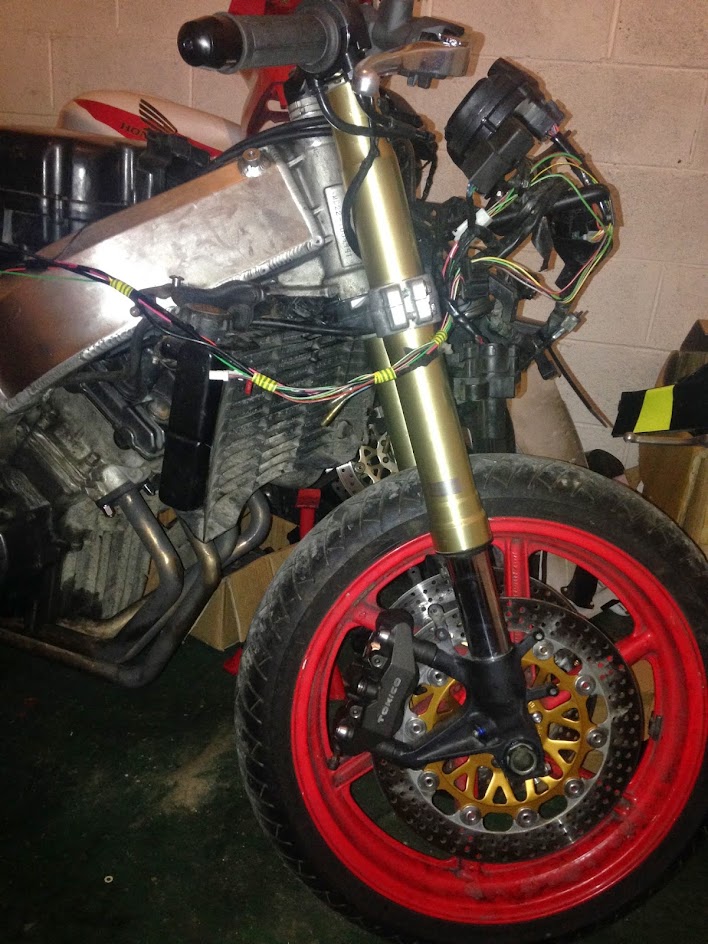 Once the main part was fitted it was time to figure out what else needed changing.

The CBR ignition barrel did fit the GSXR top clamp but the steering lock did not work so I removed the lug from the frame. That may have been the first irreversible action of the project!

The steering damper mounting lug needed to be removed from the GSXR lower clamp to clear the false air inlet ducts.

As the GSXR forks were wider, they fouled the front fairing and false air ducts. Removing a small amount of material from the ducts and fairing fixed that. The fuse box was also removed and replaced with 4off sealed individual fuse holders to make room.

The brake setup took the longest to get right. I am very particular how I want my brakes to feel and I found the stock CBR brakes felt close to perfect for my liking.

I was using a post-recall GSXR master cylinder with the standard GSXR600 calipers but I found that combination too soft for my liking although the braking power was excellent.
I had at one point acquired a set of K2 GSXR1000 calipers by accident which had 2off smaller pistons per caliper than the GSXR600 units so I tried these on the bike and found a massive improvement.

I had a bit of a clearance issue with the post-recall GSXR master cylinder though. The top entry fluid hose fouled on the mirror stay bracket & nose fairing of the CBR so I had to find an alternative. I scoured eBay for radial master cylinders that had either side or bottom entry fluid feed hoses. One attractive option was the Brembo unit from a B14 Yamaha R1.

Before spending money on yet another part, I did some calculations on all the combinations of all the parts I had to hand to try and quantify the differences in feel and braking power and map the results out to find the best solution.

It turned out the R1 master cylinder coupled with the K2 GSXR1000 calipers worked very well. Subsequent testing proved that so that has become my final setup.

Clearance under the nose fairing was also tight enough to foul most fluid reservoirs so I had originally employed a HRC style hose fluid reservoir. This worked well until one day after a session of heavy braking I felt excessive drag on the front wheel. There was not enough room in the hose reservoir to allow expansion of the heated fluid. I needed to find a proper reservoir to fit.
After more trawling through eBay the Triumph 675 Daytona reservoir looked suitable so I took a chance on it. It fit perfectly under the nose fairing! 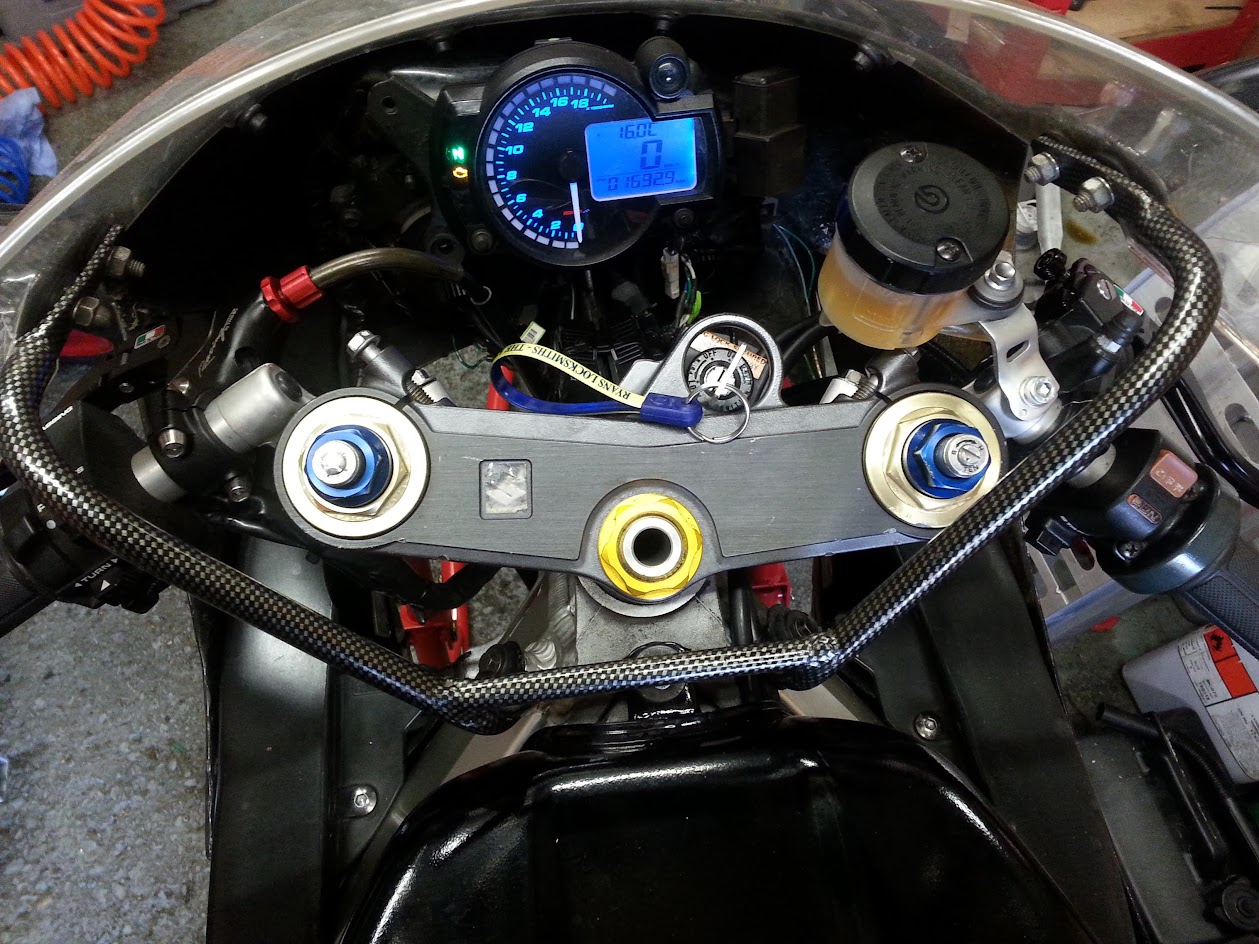 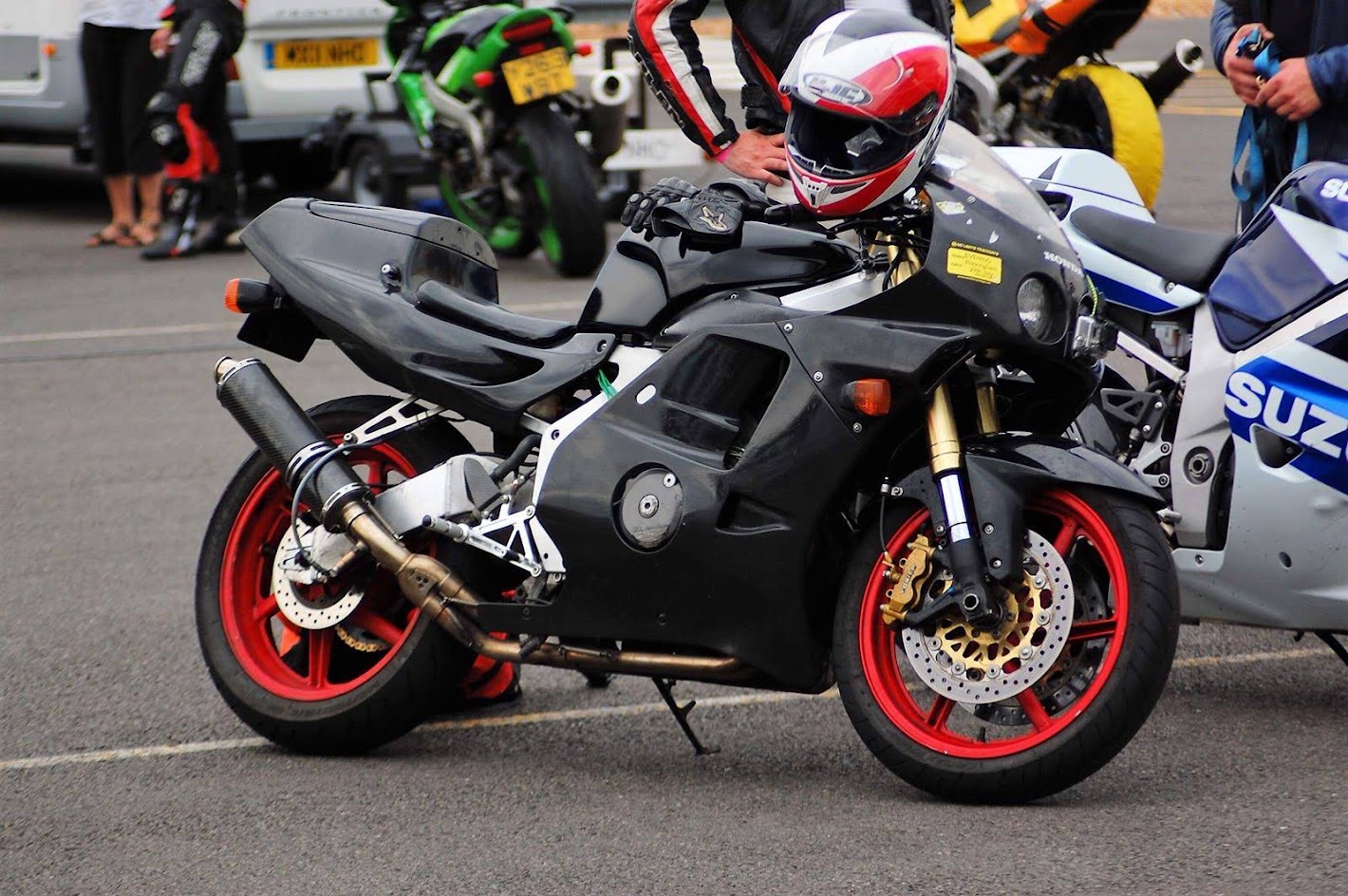 It took some time to get to the optimum setup but the result is worth it. Between the upgraded front end and the new rear shock the bike handles great! Final front end configuration as follows.