One of the things that was bugging me about the whole install was the fact that because I had converted the carburetors to throttle bodies and disabled the choke, cold starting was still a bit of an issue. There was a fine line between setting the throttle stop such that the engine would run when cold and still not idle massively high. I had got it to a point where it would idle at c.2,000 rpm when hot but when cold it would struggle to life & I couldn’t touch the throttle until a reasonable amount of heat had built up in the engine. It was OK for the short term but it wasn’t good enough for a road engine so I started looking into getting some form of idle control implemented.

I also considered a mechanical system with a thermostat that would retract a plunger as coolant temp rose and close the throttle more but the same space constraints also killed that idea.

I then thought that I could bleed air past the butterflies by using the carb sync nipples that I was already using to measure MAP from. Having air leaking in here results in rough running on a carbureted system but with the FI system I would have the ability to add fuel to compensate and make use of the additional air being drawn in. A solenoid valve could be driven by PWM directly from the Microsquirt to regulate the flow of air past the butterflies and the MAP sensor could be T’d in between the solenoid & the split to all the ports so that MAP could still be sampled in the same way as before.

After a little research I purchased a Bosch canister purge valve used in many cars and a selection of silicone hose & T pieces to plumb in the system. The diagram below shows a schematic of the plumbing I ended up with. 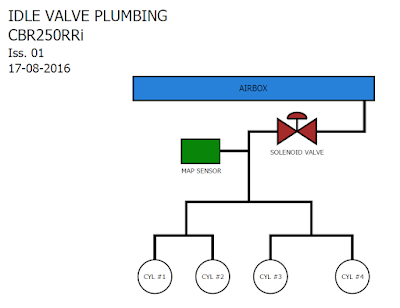 The idle control valve so far has only been tested for a very short time on the bike but so far it is looking very promising. When the engine is warm, the difference in engine speed between valve closed & valve open is 1,000 rpm and I can also use the valve to control to a target idle speed in closed loop mode. It certainly needs more running to dial in the settings but it is a big step in the right direction.

Given the addition of an idle air valve, I needed to run the signal wire from the ECU to the injector harness to drive the valve so that required a small change to the ECU harness. Small changes spiral quickly with me though and this was no exception.

Even though I had spent some time this time last year tidying up the wiring harness, I had become pretty unhappy with it as time went on. In diagnosing a faulty main relay some months back I became sceptical about the quality of connections I had made in the harness. Since most of these connections were made at the very beginning of the project when I had little experience and were added on a “when needed” and “where is accessible” basis, I did not have a clear idea about how reliable they were and where the connections were physically located within the harness. The harness was also far bulkier than I cared for and was generally not up to my current standards.

At the time I started to doubt the harness I had decided that I would build a completely new main bike harness incorporating the ECU harness and dash and a few other upgrades that would make the bike a bit more modern so I thought the old ECU harness would do the job until I got the main harness built.

However, having to run a single wire along the harness presented the perfect opportunity to tear it all apart and start again to make the ECU harness tidier and more reliable until the upgraded bike harness would be ready to drop in. The main aims for the new ECU harness were:


While drawing up the new ECU harness I decided to change the way injector power was being delivered to enable me to fit in the idle valve wiring in the same connector that was already in the harness. Previously, each injector bank (2off) had its own fused power supply so I merged these two supplies into one which also provided power to the idle valve and allowed me to use a 4-way connector between the ECU & Injector harness. That change did however force a rebuild of the injector harness even though I was reasonably happy with that. At the same time it was a good excuse to make a few nice changes and make it altogether more robust.

First was to remove all the wires from the ECU Ampseal connector that were not being used. Also any signal wires which had been cut and spliced previously were removed and replaced with fresh wire. The harness was then laid out and laced together with the branches coming off the main trunk at the correct locations. Then connectors were added and the whole lot wrapped. Installed on the bike it is now far easier to install & remove the harness and it looks much tidier also.


While that all looked good, I felt that wrapping the harness tended to twist the bundle a little when wrapping and the wrap was also a little untidy around the areas where the branches broke away from the main bundle so for the Injector harness I took a slightly different approach. I sleeved the wire bundles with DR-25 and then covered the joints with adhesive lined heatshrink to provide some rigidity. I also redesigned the harness so that the main bundle would be tied to the throttle bodies just below the airbox rather than onto the fuel rail where it was previously.

google search brought this to my attention. thank you :) this has helped me with the plumbing of my map and idle con valve. Thank you for taking the time to put this out there for people to find.

Man this thread gave me so many ideas i had not considered. I also have the microsquirt v3 that i want to put in a 2006 zx6r using 2007 gsxr600 manifold. The idle control you did here has solved one of the bigger problems i was trying to work out.

How did you run the fuel system? I have a fuel tank suited to a NA engine and am looking at mounting the fuel pump in the tank, installing everything through the fuel spout.

Hi, I'm glad to hear that my blog has helped you out with your project.

Regarding the fuel system, I modified my original fuel tank to add a ZXR fuel pump mounting flange so I could fit a ZXR in-tank pump. From the pump, it is a short run of hose directly to the fuel rail & no return. I shared some details of the fuel tank modification and plumbing in the below threads.