The starting point for the harness was to draw an electrical scematic for the whole bike, not just the main harness. This included all switches, lights, sensors, actuators and connectors. It would allow me to visualise how the connections would be managed across the bike and how circuits would be managed. It would also help define wire "nets" and be a very useful tool for reference and debugging in the future.

I used KiCad software to create the schematic. The software is typically used to design PCB layouts but as it is quite versatile, I was able to make it work to show the full electrical layout.

The schematic was the main working document for a long time and recieved a lot of changes before arriving at it's current state.

Aside from adding in the ECU, sensors & actuators, the major changes made to the original bike harness was to the power distribution aspect which ended up being quite a bit different.
The original harness had all power passing through the ignition switch and then on to a small fuse box for distribution. I didn't want any high current passing through switches but instead wanted to use relays to switch on power to different circuits when required.


The following is a summary of changes made to the power distribution side of the harness. 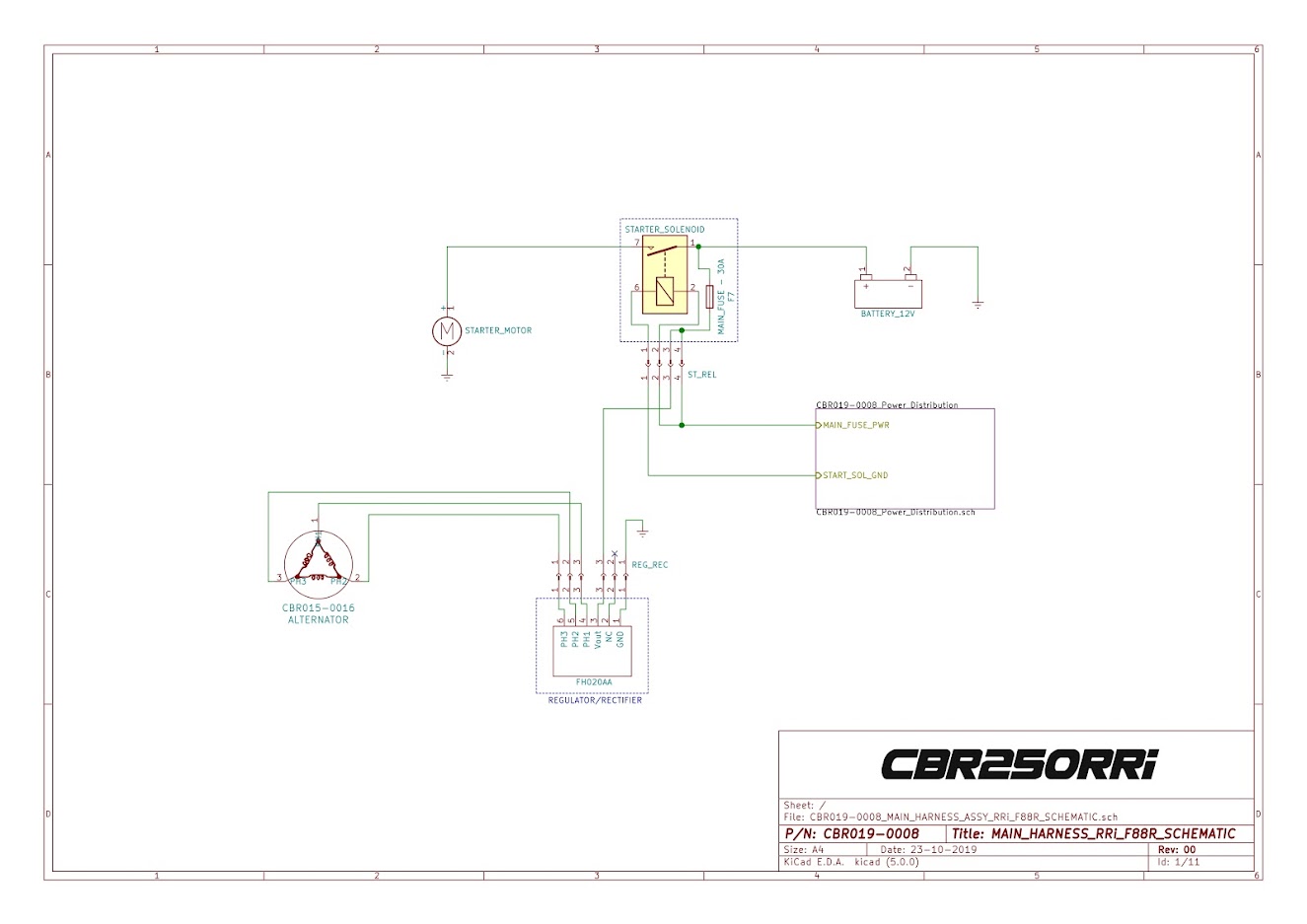 Ignition Key On
Switching on the ignition key only provides a ground connection to 2off relay coils, significantly reducing the current passing through the switch. These relays enable power to:


Engine Enable
The fused power from the controls relay is linked to the power side of an "Engine Enable" relay coil. The ground side of the coil is controlled through a combination of kill switch, side stand switch and neutral switch states. The "Engine Enable" relay provides power to the fuel injectors and ignition coils. The sidestand and neutral switches are placed in parallel so that the relay is enabled if either the sidestand is up or neutral is engaged or both. A diode is placed between the two switches to avoid the dash neutral indicator light from being grounded through the sidestand switch. The kill switch is placed in series so that it has final authority over "Engine Enable". 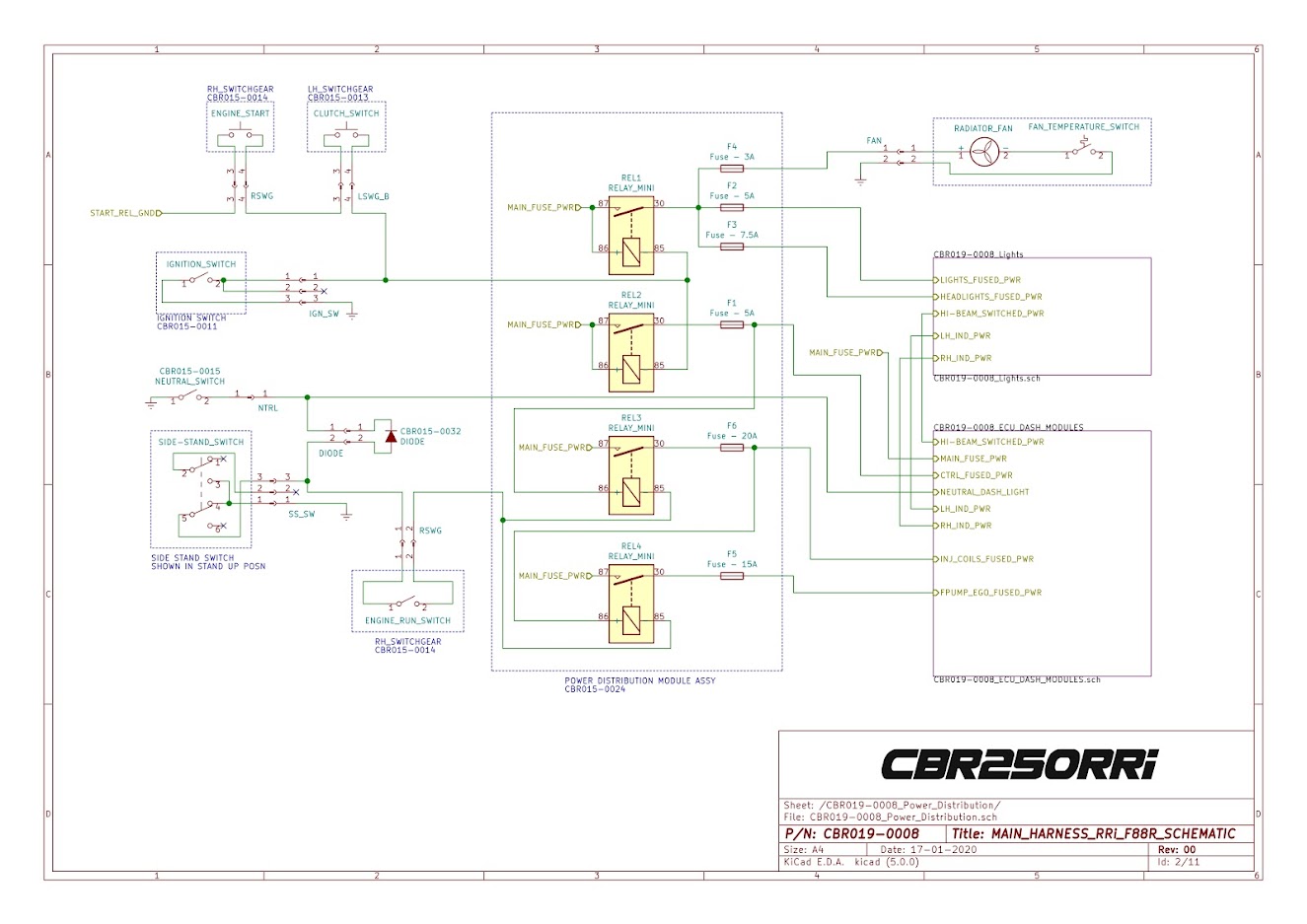 Headlights
The OEM hi-beam relay was removed. LED headlights are installed on the bike and the hi-beam circuit does not consume any more power than the OEM headlight switch was originally designed for so the relay was surplus to requirements. 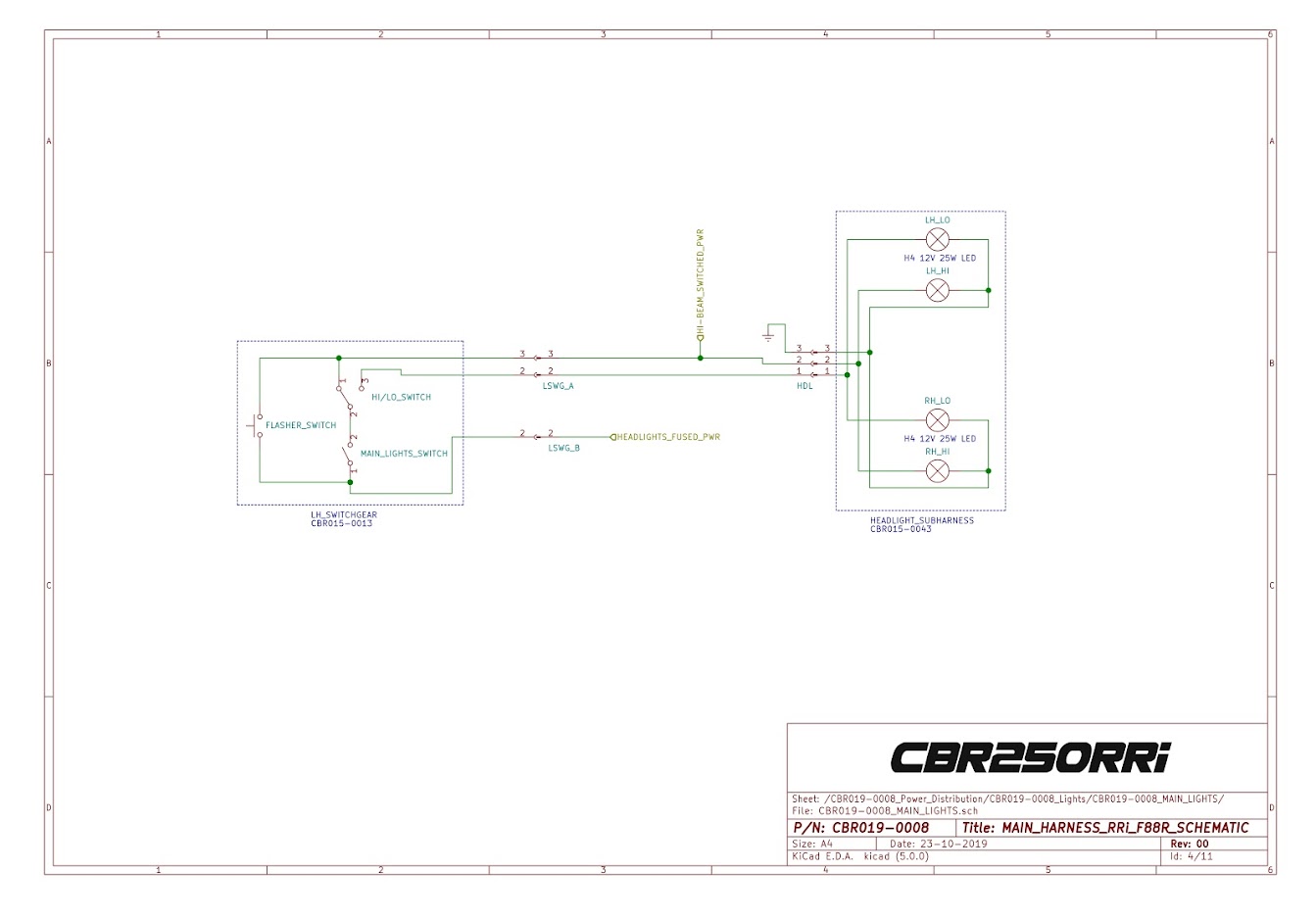 Other Lights
The OEM indicator flasher relay was replaced with a modern "nano" electronic unit. Not only does this protect against fitting LED indicators in the future but the small size means it can be placed within the LH switchgear stub harness. Quite a tidy solution. 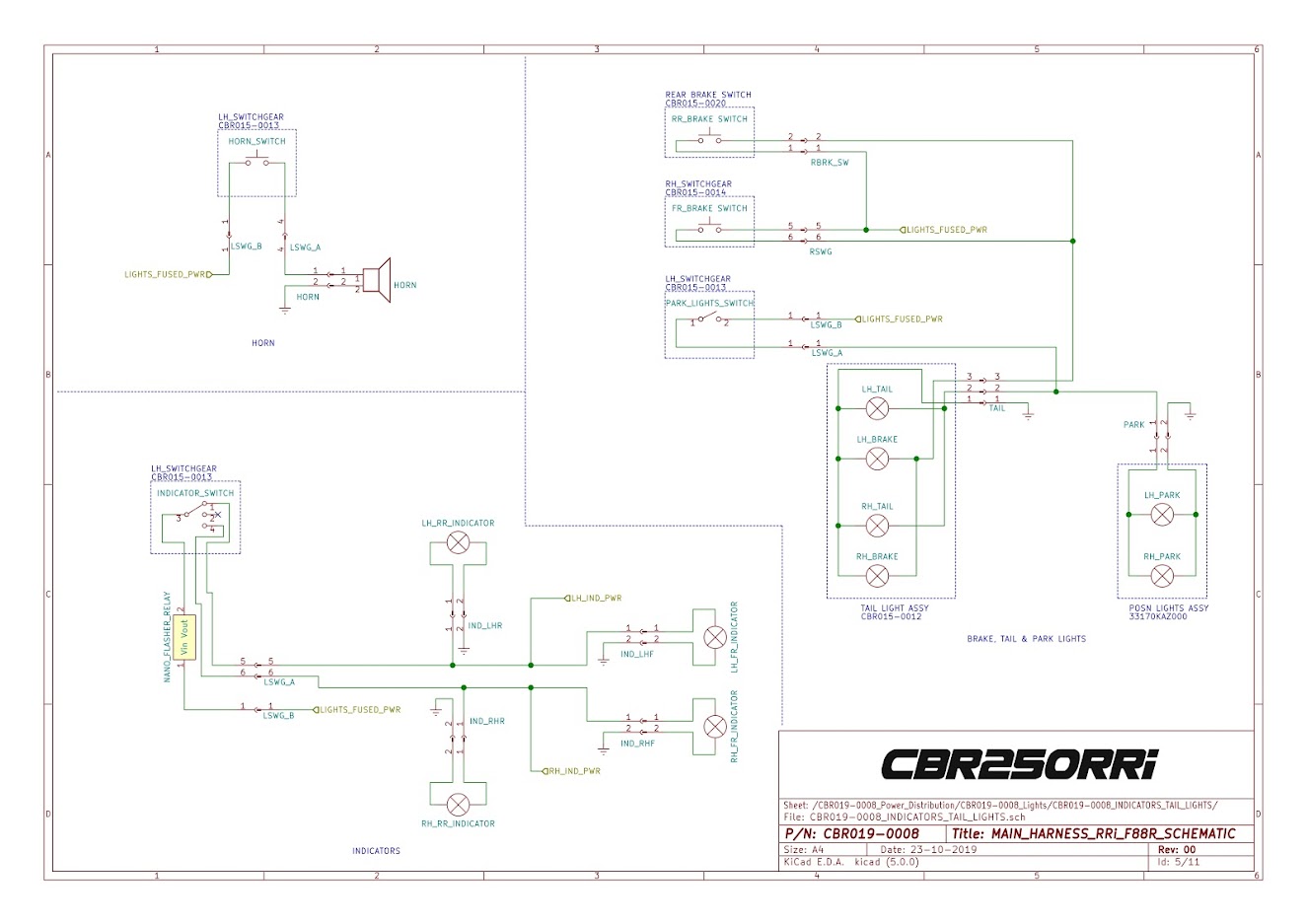 The schematic also shows sensors & actuators and the wiring provisions made for future expansion.


Once the schematic was finalised, the wire connections for the main harness were then tabulated in a pinout table used for manufacture. This table details wire cross section, connector housing P/Ns, connector terminal P/Ns, connector labels and splices.

The changes in power ditribution logic required some modifications to be made to existing components that connect to the main harness. Most of these consisted of simple connector changes but others were more complex. As much of the design for these component modifications was completed before any physical work was carried out. This way, any stumbling blocks or changes could be overcome at an early stage rather than having to change design of the main harness during construction. This approach also allowed the bike to be used right up to the point when tearing it down would be necessary.

The final stage of design coincided with the start of build. The bike was stripped down to allow all electrical components to be accessed and the old harness & components were removed.
The remaining components that required modification for the new harness were then modified and a mating connector placed on each one.
Then rope was used to lay out the harness routing. The harness transition points were defined and the length of each section of harness and branches could be measured.
With transition points and branch lengths determined, I went back to the pinout table and used the new information to split up the splices as they would be manufactured. i.e. Engine power ground is a single "net" which provisionally was bundled under a single splice for design purposes. However, in reality, there will be several splice points at different locations in the harness which each needed to be defined.
A final check of voltage drop across the higher power circuits was made to verify the wire cross sectional area and the design was ready for manufacture.