This page provides a brief outline of each of the sensors fitted to the bike and connected to the F88R ECU.
Crankshaft position
The OEM crank position sensor was retained. The original sleeving was removed, shielding braid added and then re-sleeved with DR-25. The original 2-way connector was replaced with a sealed 4-way connector. The 4-way connector is used as +5V and shield drain connections are available on the harness side. This allows me to fit a Hall effect sensor in place of the VR sensor if required. I have kept the connector spec and pinout common across all speed/position sensors on the bike.
Front Wheel Speed
I had spent some time re-designing the front wheel speed sensor installation for the Koso dash. This assembly was carried over and input into the F88R rather than to the dash. Again, the old connector was removed and replaced with a 4-way connector. 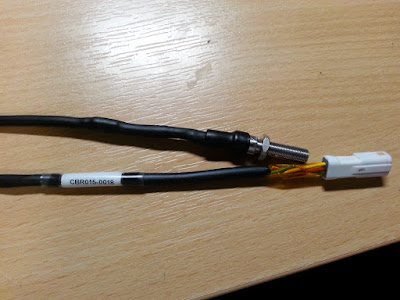 Manifold Air Pressure & Camshaft Position
The old Microsquirt installation used a Denso MAP sensor which was connected to all four inlet ports. For the F88R installation I wanted to add a camshaft position sensor and decided to go for a MAP based solution rather than tapping into the cam cover.
Testing showed that the most reliable MAP signal was obtained when only sampling a single port. Therefore the F88R MAP sensor is connected to inlet port #1 only.
The MAP sensor is an NXP MPXA6115AC6U surface mount sensor located on a small PCB board. Also on the board is an LM397 comparator IC which is used to provide "cam position" signal during starting and a trimmer pot to allow the threshold voltage for the comparator to be adjusted.
The assembled PCB is fitted into a 3D printed enclosure and encased in potting compound.
The short adapter in the photo is included to easily allow the functions (MAP & CMP) to be split to two seperate sensors in the future if required. 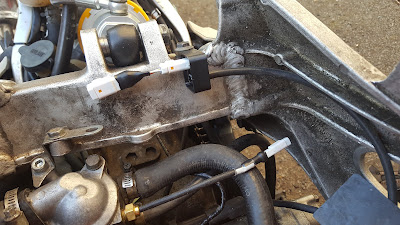 Throttle Position
The same throttle position sensor was carried over from the Microsquirt installation. It is a Suzuki unit P/N 13580-24F00.
Air Charge Temperature
The same air charge temp sensor was carried over from the Microsquirt installation. It is a Magnetti Marelli ATS05 sensor used on some Ducati models.
Engine Coolant Temperature
I had used the sensor that was provided with the Koso RX2N dash with the Microsquirt installation as it had a 1/8" BSPT thread and fitted directly into the CBR's thermostat housing. However, I found the R-T curve was not at all well suited to the 4.7K bias resistor fitted to the Microsquirt and the sensor accuracy & signal noise was quite bad at lower temperatures.
Even though the F88R has two different bias resistor values that can be used (3K & 47K) neither provided a particularly good signal voltage curve. I chose instead to swap the old sensor for another Koso unit P/N BF030125 which has a much more useable R-T curve. 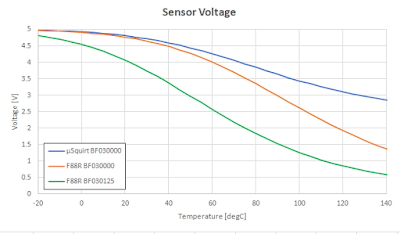 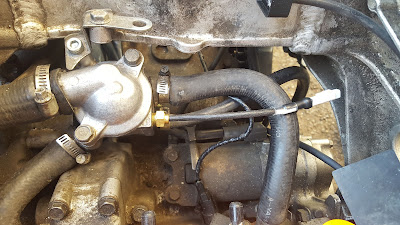 Engine Oil Temperature
I used a Bosch NTC sensor P/N 0 281 002 412 as the M14x1.5 thread allows it to be fitted in place of the sump drain plug. However, due to the proximity of the fairing panel in that area, the sensor could not be used with a standard connector. Instead, a flying lead was added to take the connector up and out of the way. 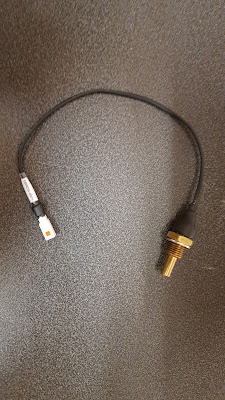 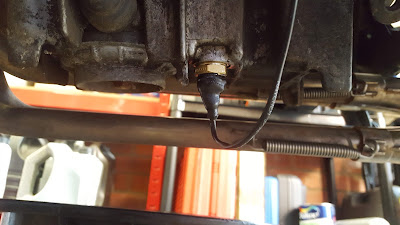 Engine Oil Pressure
I used a Bosch sensor P/N 0 261 230 365 for oil pressure. Cheap sensors can be purchased but my experience is that they are not particularly reliable and can leak through the body of the sensor. The Bosch sensor has an M10x1 thread and is designed to seal on a 45deg cone.
The logical location was to fit it in place of the original oil pressure switch. The thread in the sump is 1/8" BSPT and, similar to the oil temp sensor issue, there is not enough clearance between the sump and the fairing to fit a sensor and connector. Therefore, the sensor is mounted behind the fairing support bracket using a P-clip off one of the sump bolts. A 1/8" BSPT to JIC-3 male-male adapter is screwed into the sump and a short adapter hose assembly was made up to connect the sensor to the oil gallery.

Ambient Air Pressure & Temperature
A Bosch TMAP sensor P/N 0 261 230 030 is fitted up at the front of the bike behind the nose fairing to monitor ambient air pressure & temperature. The original dash support bracket has a convenient M6 captive nut located to the left of the Koso dash which suits the TMAP quite well. 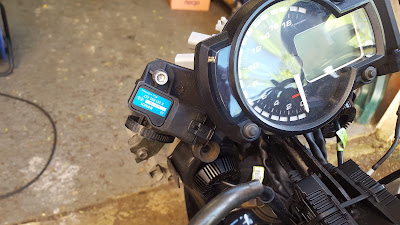 Exhaust Lambda
The F88R contains internal lambda drivers for NTK sensors. Therfore, 2off NTK LZA09-E1 sensors were fitted. The sensors are fitted in the "2" section of the TSR 4-2-1 exhaust system. This allows them to be fitted in accordance with manufacturer guidelines to prevent premature sensor failures and the intention is to run permanent closed loop lambda control. With one sensor measuring the lambda from from cylinders 1 & 4 and the second measuring cylinders 2 & 3, the engine will essentially be controlled as a V4 engine with common airbox. 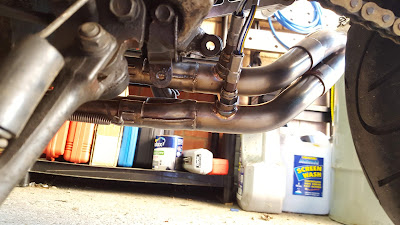 Shift Switch
The same shifter switch was carried over from the Microsquirt installation. The switch is a Translogic P/N TML-PUSH-15-2 which is supplied specifically as an aftermarket part for Triumph motorcycles. The connector was exchanged for a 3-way connector as 5V supply is provided to the connection on the harness side to allow a push-pull style sensor to be fitted in the future if required. 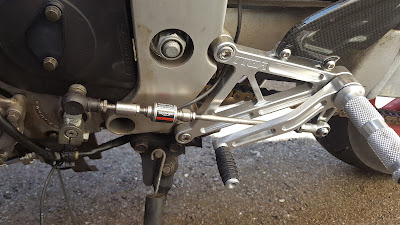 Exhaust Gas Temperature
The same basic EGT setup was carried over from the Microsquirt installation. The sensors themselves are general purpose 1.5mm K-type thermocouples. The signals are amplified and transmitted to the ECU via CAN-Bus using a specifically designed control module.
I detailed the building of the original Arduino based EGT to CAN board in a blog post back in March 2017. Since then, I have made some improvements to the design in terms of size and function. The board now uses a Teensy 3.2 microcontroller rather than the Arduino Micro which reduces the number of components on the board as the Teensy does not require an external CAN-Bus controller. More practice on my part with soldering components has allowed tighter spacing on the board. At present, flying leads out to IEC sub-miniature K-Type connectors are used. An upgrade to panel mount IEC connectors is planned. 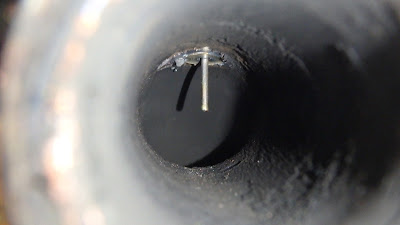 GPS
The same GPS-IMU module which was made for the Microsquirt installation has been carried over. The GPS "sensor" is a SkyTraq Venus838FLPx which is capable of 50Hz update rate but currently set up for 20Hz update rate. The board software has been adjusted to suit the F88R so that the CAN message structure matches the Life Racing GPS input. 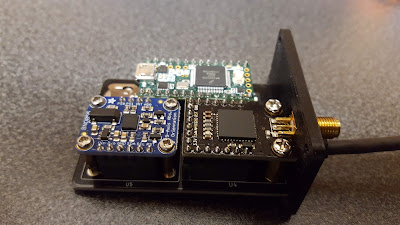 IMU
As above, the same IMU which is built into the GPS-IMU module is carried over. At present, the validity of this data is questionable and the IMU sensor board most likely needs to be exchanged for a more stable unit. This unit is fitted in the tail section of the bike near the ECU.
Also fitted at the front of the bike inside the nose fairing is a Bosch MM5.10 MEMS unit from a 2016/2017 Kawasaki ZX10R. This sensor contains 3-axis accelerometer and 2-axis gyro and also transmits via CAN-Bus.