Way back in 2014 when I had mostly completed the front end conversion and installed the Koso dash, I did not pay a huge amount of attention to the dash wheel speed sensor installation. I simply used the supplied sensor & L-bracket and used a longer fairing bolt to fix it inside the front fender and keep it out of sight.

There were obvious issues with this installation. Because the fairing bolt was M6 and the L-bracket was designed to accept an M8 bolt, the fit was very sloppy. I was also tightening the bracket onto the back face of the cast fork lower which was never meant to have anything seated on it and so was not finished flat. I was able to improve the situation using 2off DIN 9021 washers either side of the bracket but the installation was then very awkward to fit and adjust having many parts that needed to be held in place and barely having enough space to get a hand in between the fender & wheel.
Also, every time the fender or forks needed to be removed, the sensor position needed to be manually set again on assembly.

Recently I have acquired an FDM 3D printer and so it presented a good opportunity to make a nicer and more user friendly bracket to hold the wheel speed sensor in the correct position and make removal & installation much easier.
I also decided to replace the supplied Koso sensor with another, smaller sensor which would help to make the installation tidier.

My idea was to design a one-piece bracket that would be sandwiched between the front fender and the cast fork lower. The bracket would need to be located using both fairing bolts which would ensure the sensor would always be installed in the correct position.
Replacing the standard Koso sensor with the smaller unit also had the advantage that the smaller sensor has a threaded body and therefore can be installed by sandwiching the bracket between 2off lock nuts. This makes the installation tidier and makes gap adjustment relatively easy.

The Koso sensor is a simple hall effect sensor fed by 5V and whose signal is pulled high when a magnetic object passes by. The sensor I chose to replace it is one from RS Components (stock #304-172). The below image shows the size difference between the sensors.

The basic design of the bracket is straightforward. The "ears" which are clamped between the fender & fork leg were kept as thin as possible while still having enough stiffness to keep the sensor in position. Steel compression limiters were also added to the mounting holes to allow the fairing bolts to be torqued down properly without risking damaging the plastic bracket.
The sensor is located inside a round bore which incorporates a recessed internal hex for one of the sensor lock nuts. The second lock nut is then tightened onto a flat at the nose of the bracket.


The bracket was printed in ABS plastic. This may be exchanged for ASA to increase environmental resistance in the near future depending on how the ABS copes with general use. The stainless steel compression limiters were pressed into the printed part. 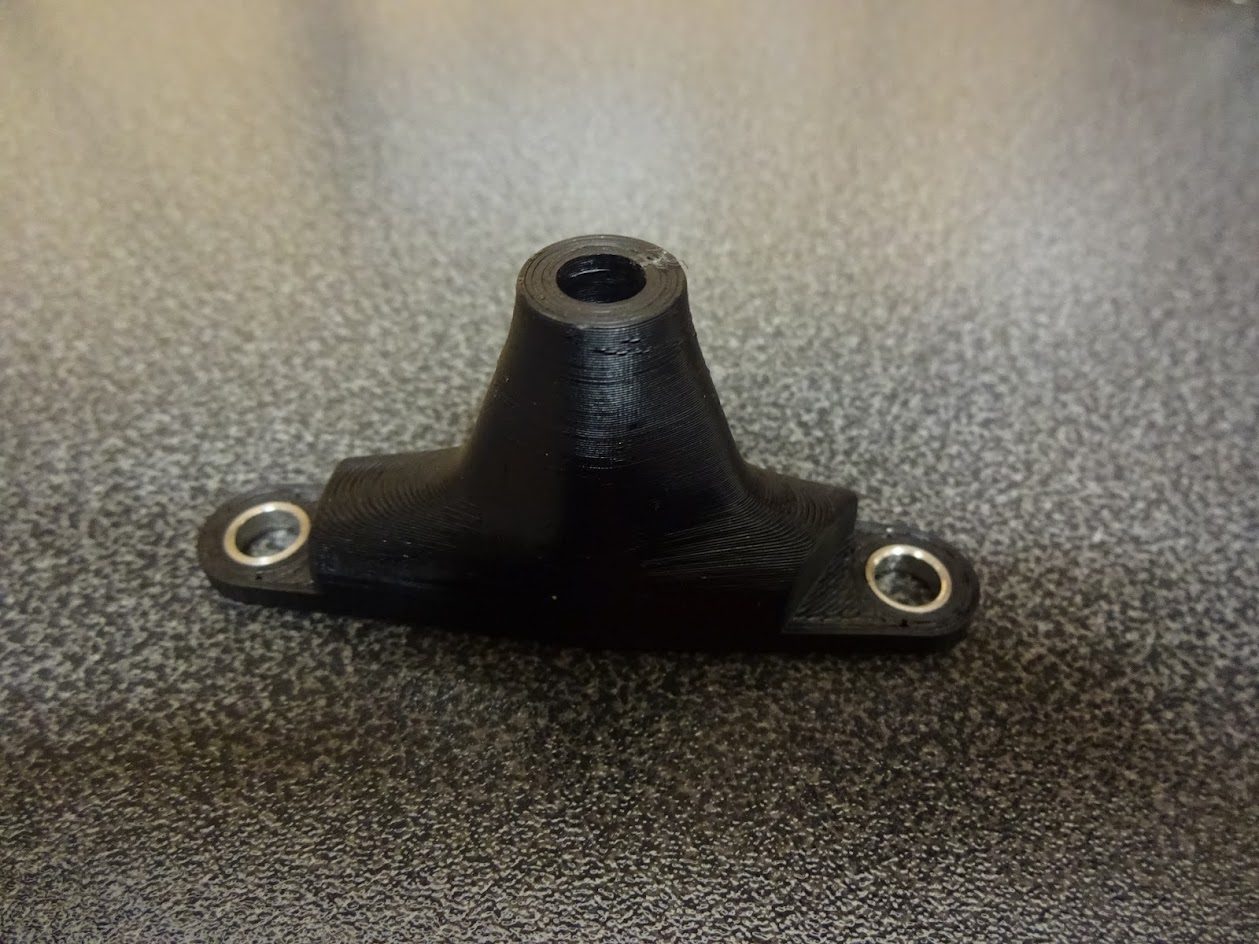 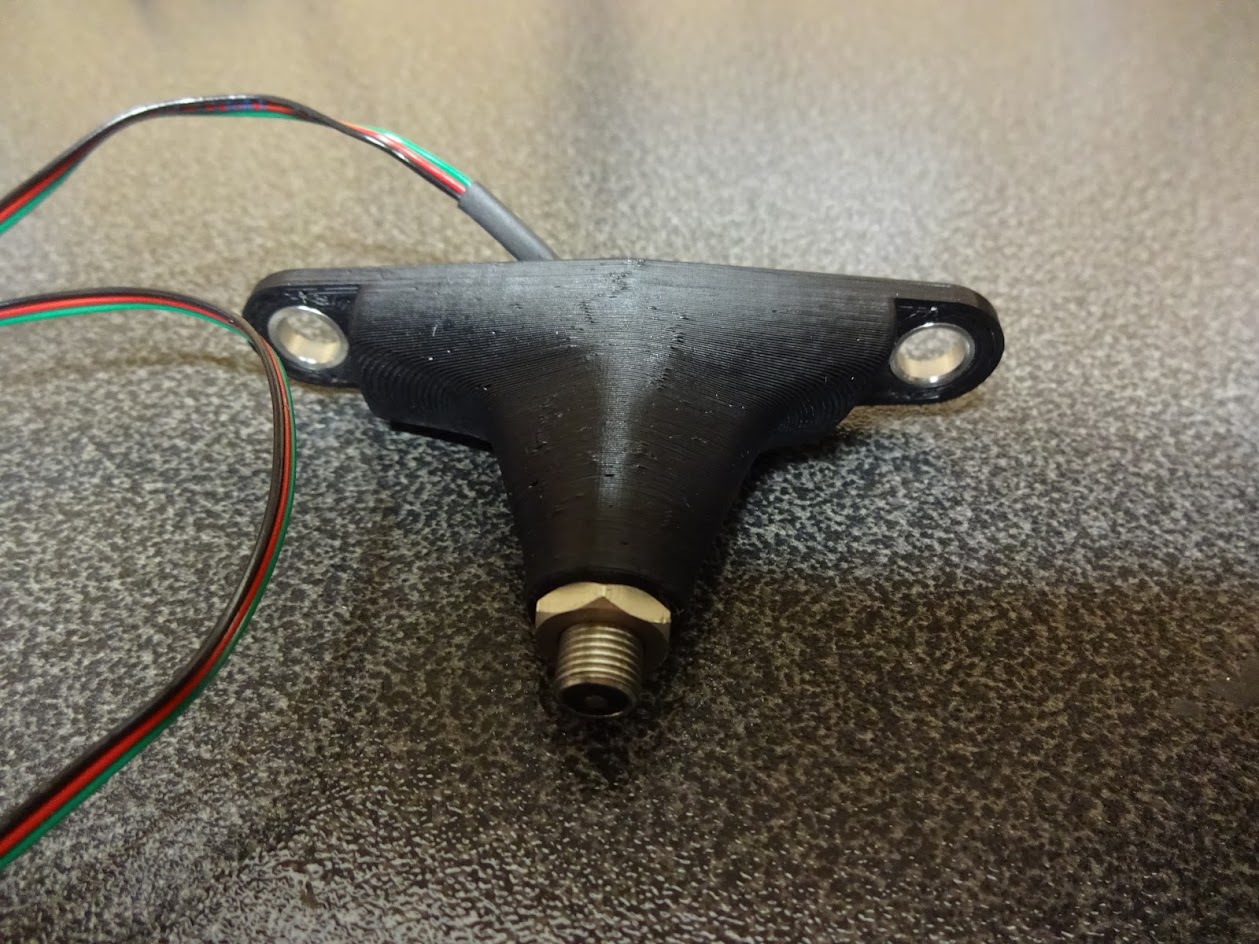 The bracket was then installed on the bike and the sensor gap adjusted to c.0.8mm.


The new sensor installation is much tidier and makes the front end easier to work on.

The observant among readers may have noticed that the bracket in the CAD model does not match the printed bracket in the photos. That is because the CAD represents a later design revision. The bracket was originally designed to centre the sensor on the low head cap screws used as "teeth". However when I tested it, I found the smaller sensor tip was sometimes detecting the hex recess in the head of the bolt and so provided either unreliable or double frequency pulses to the dash.
The issue was fixed by moving the sensor position radially outwards by 3mm. This made sure the sensor tip would only see a single solid "tooth" at each cap screw, resulting in reliable signal.
Posted by motthomas at 20:53